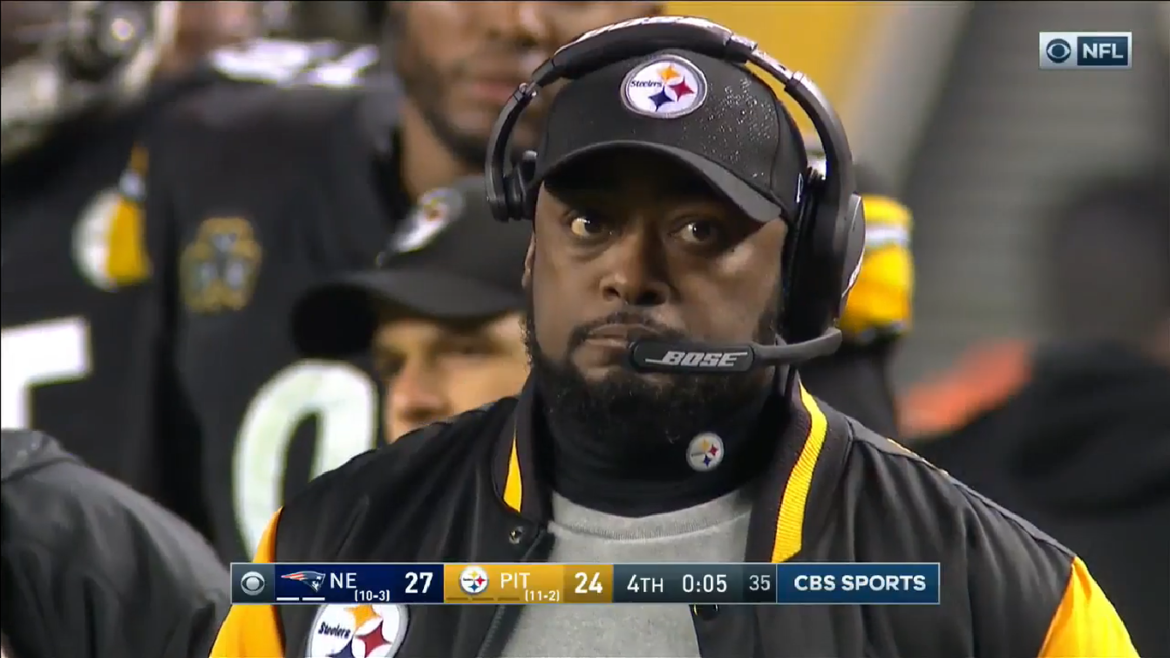 The Steelers lost to the Patriots in frustratating fashion yesterday, with the officials taking away a Jesse James touchdown in the final minute of play. After the disappointing overturn of the call on the field (which was made by the same officiating crew that called Austin Sefarian-Jenkins’ catch a touchback earlier this season – also to the benefit of New England), the Steelers still had time on the clock. Some media outlets want to point the finger at Ben Roethlisberger for seemingly calling for a spike then running a fake spike play and trying to force the ball to Eli Rogers in traffic. Ben’s pass was tipped and intercepted, ending the game. There was plenty to unpack from the last 28 seconds of game time, but it was a key breakdown in communication that led to the hurried interception.

After the Patriots touchdown, the Steelers got the ball with 52 seconds left. Ben hit JuJu across the middle who was able to turn it upfield and go down the sideline then cut back to the middle of the field for a 69-yard gain down to the 10 yard line. Ben used the Steelers last timeout as the Steelers rushed up the field to stop the clock with 34 seconds left. On the next play, which will live in infamy, Ben hit Jesse James across the middle who extended the ball across the goal line but slightly lost control of it when he hit the ground. It was called a touchdown on the field, but the officials reviewed the play and overturned the catch.

After the review, which took approximately three minutes of actual time, the Steelers offense took the field with a second and goal. In the stadium, replay reviews are shown on the jumbotron so the fans are able to see what the official is looking at on his screen. As time progressed, it became obvious that the call was going to be overturned as the official repeatedly looked at views of the ball moving then took time to look at two shots from the beginning of the play to determine the proper placement of the ball. Fans who have been to a number of games know that when the official starts to look at shots from the snap of the ball, the call will get overturned and he is checking to make sure the ball is re-spotted in the right place. The Steelers sideline should have been aware of this and taken immediate steps to prepare the offense to run another play.

What happened next was pure chaos. Ben completed a crossing route to Darrius Heyward-Bey and he was tackled in bounds and the clock continued to wind. Ben ran to the line signalling for a spike, but then was told by the sideline to run a play. On the field you could see him holding his hands over his ears as the coaches talked to him in the headset and he tried to call a quick audible. The result was the fake spike play where only Eli Rogers ran a route and the Patriots got a tipped pass and an interception to end the game.

Ben Roethlisberger says there was a difference of opinion on #Steelers final play. "It wasn't a fake spike. I was yelling 'clock it' b/c I felt that was the thing to do, to clock it and get yourself one play. And it came from the sideline: 'Don't clock it, don't clock it.'"

Ben Roethlisberger continued: "Well, at that time I'm already – everyone thinks it's clocked, so you don't have time to try and get everyone lined up… Eli saw and he ran kind of a quick slant in there and at that time you just gotta try to make a play."

This morning, various media outlets wanted to paint the blame on Ben Roethlisberger for the confusion and the interception. Ignoring the fact that the Patriots defender had two hands holding Eli’s jersey and could have been called for pass interference, the failure of the situation lies more with the coaching staff than the quarterback. With no timeouts remaining and a second and goal with 28 seconds to go, Ben and the offense should have been armed with two play calls as they came back out onto the field.

The coaching staff had at least three minutes of actual time during the review of the James “touchdown” to pull the offense together and gameplan for the next moment if the call was overturned. Had the entire offense been armed with two play calls coming on to the field, they would have been prepared for any number of situations that could have occurred with a running clock (a completion and tackle in bounds, a sack, a QB scramble). The offense then would have been able to line up and get another play off with the clock running.

In the heat of the moment after DHB’s catch, the coaching staff made the right call. Ben’s initial inclination to spike the ball was wrong. If Ben spikes the ball on third down, then the Steelers are down to a 4th and goal from the 7. In that instance, the Steelers are faced with a decision to kick a game-tying field goal and hope to win the coin flip in overtime or to go for the win on a 4th and goal from the 7. The Steelers had the time to run two plays and did not need to preserve seconds. However, that does not make up for the lack of contingency planning moments before, when the offense came back out onto the field unprepared for a second play with the clock running.

With the confusion on the field, it took the Steelers 14 seconds to line up and snap the ball after Heyward-Bey was tackled. Clear communication on the sidelines during the replay review could have saved some of this time and could have eliminated the confusion Ben Roethlisberger had when he felt inclined to spike the ball. The coaching staff should have clearly laid out the situation for Roethlisberger and the offense with the time they had during the review. If the coaches had huddled up the offense on the sideline during the review and given the players two play calls, the chaos with the running clock could have been avoided. This also would have enabled the Steelers to run an actual offensive play with multiple routes in formation rather than one receiver running a slant into the middle of the defense. Given that Ben had already called for a spike, the fake spike was the easiest audible call in order to run an actual play, but better preparation and communication on the sidelines could have made that a moot point. At this point in the season, the Steelers should be better at communicating in the hurry-up no-huddle offense. There is no reason for a mis-communication of this nature, particularly when the coaches had three minutes to brief the offense on the sideline during the replay review.

[…] about what the Steelers were doing or SHOULD have been doing over the last minute of the game then check out Ian’s piece here. It’s spot […]

A team with superior talent who were out coached / under coached. I’ll buy that and taking 14 seconds to run a play as frantically as they did. It’s kike the way they run no huddle and run the play clock down to nothing. Yes the coaching has been sub par, and don’t get me started why they aren’t doubling Gronk.