Good Monday to you Steelers Fans.

Kudos to Jim Nagy and his staff down in Mobile, Alabama for getting the Reese’s Senior Bowl played this past weekend. They organized a very strict series of protocols for all 32 teams and the players and to this point we haven’t heard of any positive cases of Covid-19. As for the game and week itself, there were many players would look great in Black and Good. Here’s a list of guys I liked during the week.

Richie Grant, S, UCF. Some guys just know how to make plays and Grant was one of them. He made several interceptions in practice and proved he could play deep or in the slot.

Amari Rodgers, WR, Clemson. This guy got wrecked on two catches during the game. One on a TD and one on a two-point conversion. He hung on both times. That was impressive but he also runs great routes and looks ‘pro ready.’

Keith Taylor, CB, Washington. He got beat for a TD but he had a good week and really knows how to play the position. He constantly gets his head around and has the body type you like for today’s corners.

Quinn Meinertz, G/C, Wisconsin-Whitewater. He’s been the talk of the week down there and rightfully so. He’s an absolute mauler who opted out of the season. Any rust scouts thought he would have was not evident. In fact, he increased his draft stock significantly by playing both guard and center spots well while showing off improved technique and balance.

Those were a few of the guys that stood along with the two EDGE rushers from Pitt and several DL-EDGE types. I’m starting to think this will be a very deep draft at key positions for the Steelers.

Tweet of the Day… We are now relying on Chick-Fil-A to help get people through vaccine lines. What a country!

If Matthew Stafford can generate the type of draft pick haul he did this weekend then what in the wide world of sports would Deshaun Watson be able to generate? It’s yet another reason his chances of being traded are slim… From the perspective of the Lions, you’re getting a bridge in Jared Goff to what you hope will be a franchise QB. Goff can have his moments, but I don’t see him as a great quarterback. Detroit also gets a ton of picks to help Dan Campbell rebuild that team. From the Rams’ perspective, they are all in. They’ve mortgaged themselves to the roof in order to bring a winner to LA and while I believe Stafford can deliver, the downside is ugly if you’re a Rams’ fan with so few picks coming in the next few years.

With today being the first day of Black History Month, here’s a great story on the young man who helped develop ‘Madden’ into the powerhouse it has become in the video game industry. Gordon Bellamy’s small ideas led to big things. If you don’t have a subscription to The Athletic you not be able to see this so I apologize. 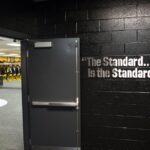