I mentioned yesterday that the Steelers face a rare summer in terms of this many key guys with contractual issues. The more I look at Stephon Tuitt’s situation the less confident I am that something gets done. Now keep in mind negotiations always accelerate when Training Camp gets rolling but Tuitt and the Steelers are far apart as I write this. I believe part of the problem stems from the fact that 3-4 defensive linemen may be not be as valued as a few years ago. If that is the case, then I don’t see the Steelers meeting the demands of Tuitt who is on record as saying he thinks he’s close to being one of the best.

Don’t miss the Steel City Blitz Podcast Presented by 26shirts.com/Pittsburgh coming up Thursday night. You can listen live and interact with us during the show.

Don’t sleep on recent free agent signing Daimion Stafford who has been very solid so far through OTAs. He’s the type of depth-Special Teams’ player the Steelers really like.

In what would normally be completely useless news, but Ben Roethlisberger has changed his hometown in the Steelers’ media guide. For the last seven years, he has referred to Cory-Lawson, Ohio as his hometown rather than Findlay. This was because of some negative reaction following his 2010 allegation of sexual assault. Big Ben reconciled with Findlay in recent months when he and his sister were inducted into the hall of fame there. It’s a minor change to most but it clearly meant something to Big Ben.

Apparently it’s official. Antonio Brown posted a Snapchat video with NFL Commissioner Roger Goodell who told AB to celebrate his touchdowns! Let’s keep in mind there are still things not allowed and any celebration must be quick because the 40 second play clock starts after the score. This ought to be fun… 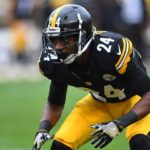