Tonight is the fourth and final preseason game for the Steelers (thank goodness) and that means a lot starters will not see the field tonight other than from the sidelines. Josh Dobbs will get the start and I discussed him last night in terms of what this game means for him. For so many others it’s an opportunity to solidify a roster spot, secure a spot on the practice squad or perhaps get picked up by one of the other 31 teams. The sad reality is that for a large percentage of guys this will be their last time on the football field as they get on with their life’s work. If you played sports for a lengthy period and committed much of yourself to it then you know what that final time feels like. In other words, it’s the last chance for many guys in Black and Gold and across the league.

James Harrison appeared again on “Speak for Yourself” and said that he believes Le’Veon Bell “may not show up” week one or any time after that. He feels that Bell is worried about getting hurt and missing out on his big pay day next year. He would need to report by week ten in order to get his accrued year of service. If there is any truth whatsoever to this then I would not be against the Steelers just parting ways with Bell now. He’s beyond talented but at what point do you say “enough is enough.”

So anybody trying to reach me i lost my phone and need to get a new one.

For the record, several reports have said Bell will report on Labor Day. I’m not holding my breath.

Fifth round pick Marcus Allen has apparently battled some injuries during much of the preseason. A quote I’m quite fond of is “You can’t make the club if you’re in the tub.” This definitely applies to Allen who needs a big night tonight in order to even have a shot of making this team.

While many focus on who survives the QB situation, two other spots are just as intriguing. At outside linebacker it appears to be Ola Adeniyi vs Keion Adams. At inside backer, L.J. Fort is up against rising rookie Matthew Thomas. I don’t see any way they cut Thomas. Is it possible they keep five ILBs? Maybe. On the outside, Anthony Chickillo is well-liked more because of his special teams play but he’s being pushed hard by Adeniyi. Watch both these spots tonight!

Make sure you check out Matt’s “What to Watch For” for tonight’s game!

Have a great day and enjoy the game Steeler Nation!

Quick His presented by 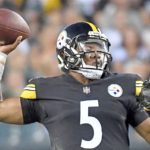