SCB Steelers Quick Hitters: The “Not a Drop” Edition

It has come to my attention this week that many fans don’t understand what a dropped pass is in the game of football. There’s been a cliche in this game that is as old as the forward pass that says “if it hits you in the hands you have to catch it.” First of all there are exceptions to every rule. Take for instance a ball thrown too deep but the receiver turns on the jets, dives and at full extension the ball comes off his hands. This is not a drop. This is a play where the receiver made a great effort and it didn’t quite work out. In Pittsburgh, we became all too familiar with dropped passes. As far as I’m concerned a dropped pass is one that hits the receiver’s hands while he’s in the process of catching it and he doesn’t. This week there was a video of Diontae Johnson with a ball zipping through his hands. Looks like a “drop” right? No. The video shows that either Johnson ran the route too short, the ball was overthrown or both. It would have actually been an amazing catch. But this isn’t a drop. I realize there is a lot of subjectivity with this but for the most part there shouldn’t be. You should know what a drop is versus an attempt to make a catch.

Great show last night with guest Rick Holman. Rick has attended the first two days of Camp at Heinz Field and gave us his thoughts on the Steelers. Rick is enshrined in the Hall of Fame as a member of the inaugural class of fans to have such an honor bestowed upon him. He’ll be in Canton this week for several festivities for the enshrinement. Ben and I also discussed many of the happenings at Camp as well. Click to listen to the SCB Steelers Podcast presented by DEK Roofing! Part of The Pigskin Podcast Network!

Tweet of the Day… Sorry but this one is “R” rated.

Kalen Ballage is having a nice camp. Despite struggling on ‘backs on backers’ he’s otherwise looked liked a guy who could contribute. If that continues it will make things more difficult in terms of which backs make it and which ones don’t… Rookie Dan Moore is struggling but I’m not too concerned about this. He’s young, still developing and he’s facing some damn good opposition across from him… Rookie Punter Presley Harvin III has been as advertised booming punts at will. Great hang time and great distance. If he can prove he can also place kicks consistently then Jordan Berry will be elsewhere… Jaylen Samuels left practice early with an injury. He’s a guy that absolutely cannot afford to miss time…  T.J. Watt continues to do just some individual work and is expected to get more involved after the Hall of Fame Game… I expect a deal for him soon… Two guys who probably won’t make the roster but have shined are WR Rico Bussey and CB Stephen Denmark. Names to know! 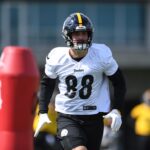