Sometimes there are things that we already know but when we are reminded of them they’re like a two by four to the side of the head. Yesterday I was a guest on a podcast and the host mentioned how this season has been a series of extreme highs and extreme lows but there was really never a middle ground. Like I said, this was something I knew but when it’s pointed out to you it just feels different. From the opening game tie to the win over New England it really has been a bizarre season. Now it all comes down to Sunday.

The debate over the Steelers’ Team MVP is one of the more futile exercises of recent memory. JuJu Smith-Schuster is more than deserving of the award and his teammates are the ones who voted him the honor. To be clear, there isn’t one guy in that locker room who doesn’t know that if Ben Roethlisberger isn’t the QB though… We aren’t talking about playoff chances. We are talking about drafting in the top ten. Now this doesn’t excuse some of the poor throws and interceptions that Big Ben has thrown but have some common sense here folks. Say congrats to JuJu and leave it at that.

I was very honored to be on the Mud and Cleats podcast yesterday to talk some Steelers. Thanks to host Tim Campbell for having me on. Here’s the link, enjoy!

Tweet of the Day… To further the point I made above.

Amid all the media angst over the winner of the #Steelers MVP Award, the fact is several of the franchise's all-time great players won it once, or not all all. https://t.co/6euZKF5a9j

It’s not looking good for Vince Williams and Sean Davis right now. Those are fairly big shoes to fill… The Bengals are really banged up at key positions like CB, WR and LB. There were stories out yesterday that suggested Vontaze Burfict’s career may be over. He is now dealing with his seventh recorded concussion.

Long time NFL tight end Benjamin Watson announced this week that he will retire once the Saints’ season is over. Always a good receiver and quality guy off the field. Good luck to him. 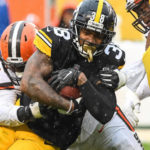 How To Fix the WPIAL Football Alignment Problem