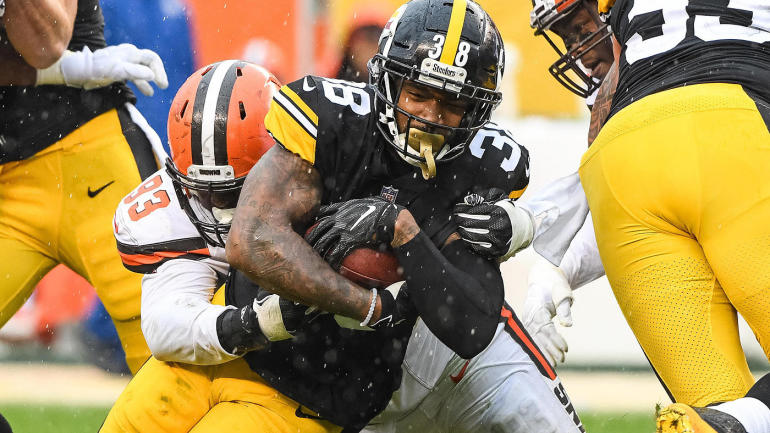 James Conner’s explosion onto our screen has caught the attention of everyone in the league, and rightly so. The newly elected Pro Bowler has rushed for 909 yards, 12 rushing touchdowns, 1 receiving touchdown and 467 receiving yards. He has truly been phenomenal, but his injury against the Chargers in week 13 opened the door for another young talent to step up.

Most black and gold fanatics didn’t know much about our fifth round selection, Jaylen Samuels. That said, there was little reason to feel this, especially after Samuels’ collegiate career. At NC State, he was one of the most versatile players to grace Carter-Finley Field. Not only did he play running back, but he was also utilized as a fullback, wide receiver and tight end.

In his junior year, Samuels amassed 13 touchdowns, 189 rushing yards and 565 receiving yards, averaging 10.3 yards per catch. That season, NC State defeated the Vanderbilt Commodores 41-17 in the Independence Bowl. Samuels stole the show however, with three touchdowns in the game. With that being the record for most ever touchdowns by a single player, he was subsequently awarded the MVP award of the bowl game.

In his senior year, Samuels made sure to have a big season. He produced a career-high 75 receptions for 593 yards and 4 receiving touchdowns. In the run game, Samuels amassed 407 yards on 78 rushes, both career-highs. As well as that, he finished the season with 12 rushing TD’s.

For his efforts he was honored as First Team All-Conference as an “All-Purpose” player, as well as Third Team AP All-American honors. He also finished his collegiate career as the all-time leader in receptions with 202. Furthermore, he concluded his career with 1851 receiving yards, 1107 rushing yards, 19 receiving touchdowns (4th all-time) and 26 rushing touchdowns (6th all-time).

Entering the draft, Samuels was projected as the 14th most talented running back. This was reflected in his selection, as he was picked 165th overall in the fifth round.

However, as aforementioned, it wouldn’t be until week 14 against the Oakland Raiders that he’d finally be gifted a starting spot. In that game, he was offered a measly 11 carries, on which he gained 28 yards. On the other hand, he demonstrated his ability to be effective in the pass game, with 7 receptions for 64 yards.

In week 15, against the Patriots, Samuels was immense. He rushed for 142 yards on 19 carries, averaging 7.47 yards per attempt. He also caught 2 check-downs for 30 yards.

In his most recent performance against the Saints, he rushed for 53 yards on 12 carries. He also caught the second of his two touchdown passes this season, as the Steelers were narrowly defeated, 31-28.

The Return of JC30

Although there is a large chance that James Conner returns to the lineup this week, don’t write Samuels off. Head coach Mike Tomlin appears intent on implementing Samuels into the game plan, and deservedly so. He is a dual threat in the run game, as he boasts explosive speed and is a power-back of sorts.  Moreover, he has proved himself to be a reliable receiver, catching 90.5% of passes thrown his way this season. As well as that, he can turn a 5-yard play into a 10-yard play with fantastic agility and the ability to evade ensuing tacklers.

There is simply no doubt in the fact that Samuels will inevitably be causing headaches for the coaching staff, as he continues to vouch for the starting spot. With that in mind, the premise of both Conner and Samuels playing in rotation sounds mouthwatering to say the least. Perhaps Steeler Nation may be treated to a partnership similar to that of the Kamara and Ingram over in NOLA. One thing is for sure however – the Steelers are stacked with talent in the running back position.

SCB Steelers Quick Hitters: The “Cart Before the Horse” Edition