As a rule, I hate trash talk. I believe you let your play do the talking. I also understand the culture in which we live and smack talking is just part of the game now whether I like it or not. As Pittsburgh floundered through the first three quarters, the Jaguars had no problem getting in the face of the Steelers and hey, they had every right based on their play to that point. I must say however that the Black and Gold got the last laugh by pulling out the win. Not only did they knock off the cocky Jaguars but they essentially ended their season. At 3-7, they are in need of a miracle to make the postseason. So while I might not like the trash talk, I love it when it can be thrown back in the face of those speaking it.

I don’t think Jacksonville stumbled on any ‘blueprint’ per se on how to beat the Steelers’ defense. I just think they match up well against our front. I also think they played with great desperation and we didn’t match that intensity early on.

James Conner will learn from yesterday. Thankfully he’ll be able to do it in a way that didn’t cost his team a game. I don’t need to tell him that he has to make that catch. He knows.

I think we really need to acknowledge how great the Steelers’ D was in the fourth quarter yesterday. They had every reason to be completely gassed after being on the field so much in the first half. Kudos to them on a heroic effort.

Tweet of the Day… If you aren’t following Peter on Twitter then this is the type of action you’re missing. Brilliant photo here.

One of the topics we’ll surely discuss on the Steel City Blitz Steelers Podcast tomorrow night will be the play-call on first and goal. The Steelers needed one foot and chose to go from the shotgun. The play was one they’ve run before in a similar situation and as it turned out it really doesn’t matter. But it concerns me that we couldn’t let out 6’5″ QB fall forward for the win rather than do what he ultimately did.

When you have guys that play next to you go down and miss action you want to do whatever you can to make up for their absence. Javon Hargrave did that yesterday. He played a really solid game without Stephon Tuitt next to him and his play was vital to the team’s success.

Had Ben Roethlisberger been ruled down short of the end zone would Tomlin have gone for it with just three seconds left? I say yes.

The Steelers got a bit of help yesterday with Baltimore and Denver both winning. The Chargers were 7-2 heading into that game but have yet to beat a team with a winning record. And the Broncos will not be an easy win for the Steelers next Sunday either.

Both Antonio Brown and JuJu Smith-Schuster were over 100 yards receiving yesterday and they accomplished their respective tasks in very different ways. Most of AB’s yards came on his long TD catch while JJSS compiled his yardage over the course of a number of shorter throws. In the end, it doesn’t matter how they do it just that they do it!

On to Denver! Have a great day Steeler Nation! 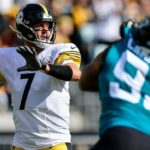 Ben Saves Ben as Steelers Come Back to Beat the Jags 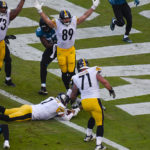