I’ve been around long enough to remember when Mel Kiper, Jr actually became “a thing.” Like it or not, he really was the first draft guru to come on the scene which has exploded into a massive phenomenon. The thing about projecting what college players will become NFL stars is that it’s not easy. There’s a lot more to these young men than just their ability to play. Considerations must be made about injury history, disciplinary history and even whether they have a girlfriend or not. Like all gurus Kiper has had his share of misses. He once called JaMarcus Russell a “future Hall of Famer.” This week, Kiper released his latest mock draft. He has the Steelers taking Alabama center Landon Dickerson at 24. Now Dickerson may well go on to be a really good player but this is why Kiper is often blamed for “cashing it in” on some picks. Dickerson is coming off ACL surgery. His size (6’6″ 324lbs) and lack of overall athleticism suggests he will fit best in a power blocking scheme. Kiper clearly doesn’t take these things into account. With Matt Canada running the offense, the O-Line will need to be more athletic and mobile. Dickerson doesn’t fit that mold. To be fair, I’m not an expert either. I honestly didn’t think T.J. Watt would be anything more than a serviceable OLB. So yeah, I’m not perfect either but for an “expert” like Kiper I expect better.

Tweet of the Day… If you’ve never been to Pittsburgh before, well, this.

Haven’t seen this yet so pic.twitter.com/GQCpNfyME0

Ellie joined Ian and I on the SCB Steelers Podcast presented by DEK Roofing Inc last night. We spent time talking about the likely return of Ben Roethlisberger and the financial and on-field ramifications. And we looked at some of our latest Draft Profiles which included a look at Dickerson. Check it out!

I’ve seen recent discussion about the possibility of the Steelers moving up in the first round to grab one of the top quarterbacks in this draft and I’m not here to tell you that’s impossible. I’m here to explain what it would take. Let’s just assume North Dakota State’s Trey Lance is still on the board at 15. The Steelers would need to give up their pick at 24, plus at least one more early pick (likely a third rounder) AND a first round selection in 2022.  This would probably be the starting point for such a move up. The end game is that you better nail this. Kevin Colbert has to rebuild his offensive line, find a running back and add depth to his defense. If he believes he can still do this and still give up that bounty then so be it.

SCB Steelers Podcast 210 – Is Seven Back for Another Go? 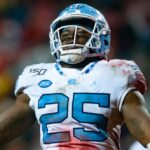