One of two things will happen by 4pm Eastern time today. Either Le’Veon Bell fails to report as has been speculated and we go on with our season or Bell shows up and a soap opera of epic proportions begins. I don’t need to re-hash this whole thing; most of you are as sick and tired of it as I am but I’ll be glad when it’s over. It’s been exhausting and it’s been overwhelming at times to try and figure this all out but let me last say this… I would rather ride with this team as it exists and deal with the consequences rather than win with Bell. On to other things…

Last year in the two losses to Jacksonville, running back Leonard Fournette had quite a bit of success for the Jaguars. I asked this question last night, “Are the Steelers better prepared for him this time around?”

Have to wonder if the NFL considered moving that game from San Francisco last night. Air quality reports were “bad” and many fans had masks over their faces in an effort to keep out the air which has been heavily polluted by the rash of forest fires in the Golden Gate State. Can’t see how breathing that in was good for players.

Tweet of the Day… This is what you do when you still have two games left against his ‘former’ team.

Bengals announce that ex-Browns coach Hue Jackson has been hired as special assistant to the head coach.

Jeremy Fowler, ESPN’s Steelers’ Beat Writer does a good job with a timeline here of the Bell Saga but there are two things I noticed. First, Fowler doesn’t mention Bell being late to a team walk-thru prior to the playoff loss to Jacksonville and when he says he tweeted “farewell Miami” he doesn’t do so correctly. Bell spelled ‘farewell’ f-a-i-r-w-e-l-l. I make spelling errors all the time but when I know millions of people are going to see what I write I’m going to do a better job of spelling I can tell you that.

Next time the Steelers play in Heinz Field they should have a new grass surface. With Pitt and the WPIAL finals taking place there the current sod will be in quite a mess.

We will discuss the outcome of Bell’s decision and much more tonight on the Steel City Blitz Steelers Podcast presented by 26shirts.com/Pittsburgh. 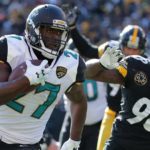