SCB Steelers’ Quick Hitters: The “How They Should Be” Edition

Good Thursday to you Steelers’ Fans!!

Pittsburgh Steelers’ President Art Rooney II unveiled the team’s new throwback jerseys for 2018 yesterday and I for one could not be more excited. While I am far from the only one, I have made it a personal crusade of sorts to bring back block numerals to the Steelers’ current jerseys. You can imagine my excitement when the jerseys from the Super Bowl XIII era were announced as this year’s throwbacks. Gone are those “streamlined” numerals and the Steelers’ logo patch is gone as well. Nothing but white and gold stripes and block numerals! They will be worn for the October game against the Cleveland Browns and I am hopeful (it’s a long shot) that these jerseys will return as the team’s main uniform.

The Steelers join Pitt as teams who need to make their throwbacks the permanent jerseys https://t.co/TST3vMmItQ

Unfortunately yesterday was not all good news. Offensive Tackle Jerald Hawkins left practice with what has been diagnosed as a torn quad muscle. Tight End Jake McGee, who we felt had a legitimate chance to make the roster, has a torn achilles’ tendon. McGee will most definitely miss the 2018 season while Hawkins looks to be destined to the same fate. Hawkins’ loss is significant and I took a look at why yesterday.

Tweet of the Day #2 … Talk about needing to live up the hype.

Steelers are already in awe of Chuks: "If he went to Alabama, he's a first-round pick" https://t.co/YnoQbL5JiT

With the injuries yesterday, it’s easy to understand why Le’Veon Bell isn’t there. It’s also easy to see why Ben Roethlisberger and Antonio Brown don’t participate in each and every practice as well. Is what it is.

He may not be a Steeler but Jermaine Gresham is OK in my book. Here’s why.

On a personal note, my daughter is graduating from high school this evening. For those of you with older kids, you know what this is like. For those of you with younger kids, it goes faster than you can possibly imagine. Enjoy all the moments you have as they grow up. Here’s my favorite Steelers-related story with my daughter…. She was about 9 years old and we were at Training Camp. It was a typical Camp day in Latrobe – hot, humid, no breeze – and she was a trooper. Her favorite was Hines Ward. So as practice came to a close we moved towards the fence where Hines was catching balls from the juggs machine.

Within minutes there were 100 or more people in an area the size of a small bathroom and here came Hines to sign autographs. As we moved forward in the mob, she disappeared in an instant but she kept yelling “I’m getting closer Dad!” I eventually got close to the fence, stuck my hat out there and Ward signed it despite the fact I didn’t actually see him sign it. So now I had this fear that I would have the autograph and she wouldn’t… I left the mob and stood back waiting for her to emerge. Within another 30 seconds she came running out and sure enough he had signed her hat. She had wiggled her way all the way to the front and got to see him up close while he signed it. Obviously a great memory for her and for me.

Oh, there may or may not be a Terrible Towel at her graduation tonight. 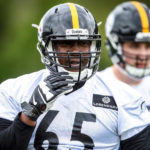