SCB Steelers’ Quick Hitters: The “Haley By the Lake” Edition

Our good friend and former offensive coordinator Todd Haley has landed on his feet and I don’t mean from a robotic bull at Tequila Cowboy. The Cleveland Browns have made Haley their new offensive coordinator which may come as a bit of a surprise considering the Browns never really seemed to be in the conversation. Haley leaves a 13-3 Steelers’ team and heads to the ‘Mistake by the Lake’ where they’ve won one game in their last 32 starts. He’ll have a handful of quarterbacks but with overall picks one and four there’s a good chance Haley will be able to groom a rookie. I wouldn’t be surprised to see him have a little success there but I wouldn’t write Cleveland into the postseason just yet.

It is with tremendous pleasure and pride that I announce that 26shirts.com/Pittsburgh will return as our podcast sponsor for 2018. We absolutely love working with the and helping them spread their social media stuff because they do such great work for great causes in Pittsburgh. They’ve raised over $400,000 and I’m grateful to have the chance to promote their stuff as often as possible.

I admit, I didn’t think James Harrison had a lot left in the tank but I felt he would definitely be good for 12-15 snaps especially late in games. I would have rather seen several other guys cut loose but based on Harrison’s behavior the Steelers felt they had little chance. Pro football is a business but it still pains me to see him in New England. Kinda takes the shine off of his Steelers’ career.

There is nothing wrong with trash talking. You just have to be able to back it up.

Please make sure you ‘like’ our Facebook page and give us a good review of our podcast on iTunes!

Make sure you check out this excellent article by Ian on just what the options are with Le’Veon Bell.

What’s coming from SCB? Besides our excellent draft coverage headed up by Cnic, Ian will also be doing Winter Olympics’ Previews and NCAA ‘Bracketology.’

There was an article last week that suggested with Todd Haley gone “Ben Roethlisberger has no one left to blame.” What in the hell does that mean? While Ben is no stranger to the dramatic quote, I don’t think I’ve ever heard him blame a loss or a poor performance on Haley. He knows when he throws a bad pick and he knows when he holds the ball too long. Is the author suggesting that Big Ben blames others for not getting this team to another Super Bowl? Did he not see the defense in the last two postseason games? Sheesh. 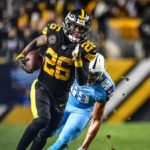