One of the reasons I started SCB was because I was tired of the constant “sunshine up your rear” takes by most outlets. It’s also part of the reason why the term “pragmatic” is in our motto. This doesn’t mean that we don’t look for positives. It means that we take facts and apply them to our thinking. With the Steelers 2-0 and having won 11 straight regular season games, I’m amazed at the “gloom and doom” takes people have. Look, I get it if you’re frustrated over the AFCCG loss to the Pats; it irritates me too. But have some perspective please. This team still hasn’t played its best but it’s winning. It isn’t nearly as bad as some will have you think.

One stat to keep an eye on although it’s just through two games is third down conversion percentage. The Steelers after two weeks rank 27th in the NFL. They are converting at a rate of just 30.77%. In 2016, the Steelers converted third downs at a rate of 42.74% which by the end of the year ranked them 10th in the NFL. To say this has to get better is an understatement.

Never thought I’d say this but so far Special Teams’ Coach Danny Smith has his unit performing at a very high level. Not only have they blocked a punt and got a touchdown as a result but they also sniffed out a fake punt by the Vikings on Sunday.

I think the James Harrison situation from Sunday could have been handled better and I fear it’s yet another sign of poor communication between Mike Tomlin and Joey Porter. When T.J. Watt went down, Porter immediately went to get Harrison in and that’s when Tomlin intervened in favor of Anthony Chickillo. While you can never predict who gets hurt or when, this is something that is usually discussed each week. If they feel Chick is the better option right now I’ve got zero problem with that. Communicating that to the necessary players would have probably been a good idea though.

Tweet of the Day… I had chest pains just looking at this.

Adam Schefter reported yesterday that former Steeler Lawrence Timmons’ problems may be a result of some issues with a child. Whether that is the reason for Timmons’ erratic behavior of late or not we shouldn’t be trying to come up with the cause ourselves. There was way too much speculation yesterday and much of it was ridiculous.

I think Cam Heyward’s performance Sunday proved a very important point about the difference between he and Stephon Tuitt. Heyward was able to find success with Tuitt out but when it was the other way around, Tuitt struggled. I had no problem with the Steelers reaching a new deal with Tuitt but his worth is not as close to Heyward’s as the money now stipulates. 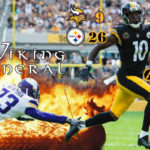 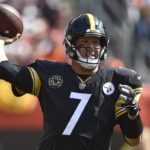