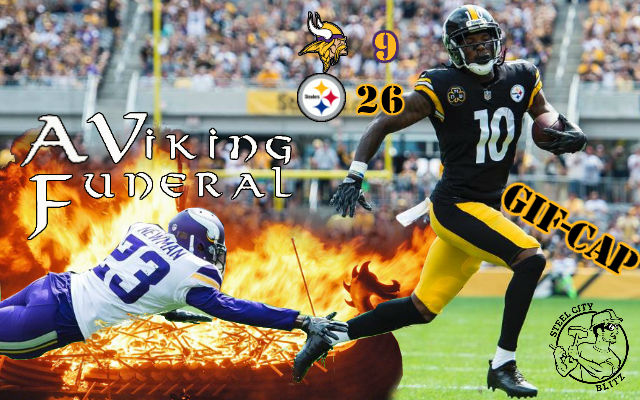 The Steelers gave a very nice tribute to Dan Rooney before the game and raised a new flag in his honor in the Gate A Plaza. This was followed by Ben coming out of the tunnel carrying a DMR flag. Just an awesome moment that sent shivers down your spine.

Before the game, word trickled out that Sam Bradford would be inactive. Thankfully, their backup was Case Keenum and not Ragnar Lothbrok.

The Steelers got the ball first but couldn’t get anything going after an illegal formation penalty wiped out a third down conversion. The Vikings responded by taking a holding penalty on their next drive and putting themselves behind the chains.

The Steelers made it a point to get the ball to Le’Veon early and often, but like last week he didn’t have much room to run. AB came up just short on a 3rd down play and Ben rushed the team to the line. Everyone in Western Pennsylvania knew he was going to hard count the Vikings and then call timeout and not actually run a play. Fortunately the Vikings aren’t from Western Pennsylvania and jumped offsides.

Two plays later, Ben went deep for AB who got held up and drew a big pass interference penalty. After working their way for a few first downs on the run, a holding penalty set things back. On 1st and 20, Ben hit Bryant on a short slant and Martavis turned on the jets and straight up ran away from the corner and the safety and beat everyone to the far pylon for six.

The Steelers set up to go for 2 but got a delay of game penalty, which may have been a blessing in disguise because they kicked the extra point instead.

The defense forced a 3-and-out and a bad punt set the Steelers up in good field position. Le’Veon got us across midfield but Alejandro Villanueva committed a penalty then gave up a sack to set things back.

Ben was not deterred and went deep to Martavis who had a step on the corner on a deep post route. Rather than giving up a touchdown, the corner dragged him down before the ball got there to bring out the most obvious pass interference flag in history. Le’Veon got us down to the 4 then Ben flipped one to JuJu on the ol’ Fran Tarkenton Shovel Pass play for JJSS’ first career touchdown.

With the Steelers up 14-0, the Vikings tried running the ball with 3 different players, but Cam Heyward was absolutely everywhere. Keenum hit one deep pass to Adam Thielen down the left side to get them in field goal range. Keenum couldn’t complete another pass after that but it got Minnesota on the board.

Both teams seemed intent on running the ball, but neither offensive line was able to open up much room. The Steelers were pinned deep and two mediocre punts by Berry gave the Vikings the ball near midfield multiple times, but the defense held to 3-and-outs. Cam Heyward was an absolute monster in the middle. After coming close a few times, Bud Dupree rang up a sack after zipping around the edge and turning the corner on the tackle.

The Steelers got the ball back with 3 minutes left in the half and Ben started working the short passing game, completing 6 straight passes to get us out across midfield. With a minute to go and all 3 timeouts, the Steelers had the chance to work the middle of the field and get into field goal range. Unfortunately Ben wasn’t particularly interested in that and took 3 deep shots which all came up empty.

The Vikings got the ball out of the half and promptly went 3-and-out. On 4th and 4 they opted to try a fake punt but Dirty Red Tyler Matakevich sniffed it out and made a great defensive play to knock the ball away from the intended receiver. Second week in a row Matakevich has made a big Special Teams play.

The Steelers couldn’t do much with the ball and Boswell missed from 51. But wait! There’s a flag!

The Vikings got flagged for illegal formation for lining a defender up over the center. Boswell took advantage of the 5-yard penalty and boomed it through from 46. Make that 17 points for the Steelers that came on drives bolstered by Vikings penalties.

Down by 14, Minnesota opened up their offense and let Keenum throw down the field. He got a pass interference penalty against Artie Burns and hit Stefon Diggs down the sideline for another big play to move the ball into field goal range. Dalvin Cook got loose on the outside and seemingly scampered in from 26 yards out. Sean Davis had made a shoe-string tackle attempt after Mitchell wiffed in open space and upon review it showed that Cook’s knee was down at the 1. Some fullback vultured a touchdown away from Dalvin Cook’s fantasy owners.

Le’Veon started to hear some grumbling from the fans as he was kept mostly bottled up, but Ben and Martavis took care of things. Ben found Martavis on a post over the middle to convert a 3rd and 12. On the next play, Ben went deep and hit The Alien down the sideline for a 51-yarder to set us up in field goal range. The offense didn’t do much else but Boz converted to put us up by 2 scores.

The Vikings kept taking penalties and backed themselves into a 3rd and 20 but got lucky when TE Kyle Rudolph made a juggling catch across the middle to convert. Luckily, they took another holding penalty near midfield which effectively ended the drive.

The Steelers were able to work the ball into Vikings territory on the next drive, partially thanks to Ben making a throw that only a few QBs on the planet can make. Rolling out to his left, Ben made a throw on the run to float it over a defender and drop it right along the sidelines into Eli Rogers’ hands.

The offense would get into long field goal range, but Le’Veon couldn’t get away from a defender on a 3rd down checkdown. Tomlin sent the field goal team out for a 47-yarder, but long snapper Kameron Canaday got flagged for a false snap. The Vikings couldn’t stop taking penalties, however, and ran into Jordan Berry. But rather than take the 5 yards back and try the 47-yarder like he had originally intended, Tomlin declined the penalty and stuck the Vikings on the 1 where the punt was downed.

The Vikings were able to get out of the shadow of their own goalposts but not much farther after Vince Williams rang up a sack.

The Steelers got the ball with 8 minutes to go and ran nearly 5 minutes off the clock. Ben was finally able to get AB in some favorable matchups by running him on shallow crosses under the linebackers. Le’Veon kept grinding even though he wasn’t breaking anything. The Steelers got the ball to the edge of the red zone with under 4 minutes to play, but rather than continuing to work the short passes and running game, Ben took two shots and they fell incomplete to stop the clock. Boswell put us up 14.

Minnesota just couldn’t get out of their own way and wiped out two good plays on their next drive with penalties. The second of which was a fourth down conversion. They tried again and nearly got it on a pass to Diggs on the sideline, but the officials called it incomplete then upheld the call after a challenge.

Down by 14 in the sweltering heat, Minnesota used their last few timeouts to stop the clock and prolong the game.

Boswell booted a field goal to make it a 3-score game right after the two minute warning and that was all she wrote. Minnesota didn’t pick up another first down and fumbled on their last play.

Watching the game Ben appeared a bit off on his deep throws. They were also pushing it to Brown a bit in the second quarter and basically wasted 3 possessions. Like i said this unit has very little time together this year i expect a better showing this week.

I felt like the deep shots in the 2nd were intentional – Minnesota came out with a similar defensive gameplan to Cleveland. They wanted to stack the box against the run. Harrison Smith was basically playing at the line of scrimmage in the first quarter. After we took a few deep shots, the safeties started to sit back a little bit and that opened up the running game more (we also started to run out of spread sets to get guys out of the box). Even though the deep shots weren’t all successful, they did serve their purpose to pull the safeties back and open up the underneath passes and running game.

I look at deep throws this way, you can either put it in a 5 gallon bucket or a kiddy pool. Right now Ben ain’t even in the kiddy pool. Things will get better, but they are a bit off right now. I do agree that he threw a few away but he did have other options running open.

Btw you guys are doing a great job. It’s interesting reading your guys different perspectives. And the pragmatic approach is really cool. It’s so easy to say the Streelers are always right and if you question what they do, well your not a true fan. Keep it going guys!!!