The recent performances by Benny Snell, Jr and Jaylen Samuels have allowed the Steelers to be in no rush to get James Conner back on the field. Conner has been battling a shoulder injury has missed the last two games and most of a third as he left early in the first game at Cleveland. With Conner getting closer to game action, Mike Tomlin and Randy Fichtner face some potentially difficult choices as the backfield has suddenly become a full house. It’s safe to say that Conner will likely move back into his starting role but it’s also hard to keep Snell and Samuels from getting some snaps as well. According to Tomlin though Conner still sounds like he may be a week away. If that is the case then I expect to see Kerrith Whyte get a helmet for at least one more week as he can offer a change of pace when needed. All in all, the backfield situation bears watching in the final four weeks of the season.

We will be recording the Steel City Blitz Steelers Podcast presented by 26shirts.com/Pittsburgh tonight and there will be plenty to discuss as always. From Duck’s day to the defense’s pressure we’ll cover it all as only we can. Please make sure to give us a review and/or rating on the platform you use.

Ian has hammered out everything you need to know about the Steelers and the rest of the AFC as the postseason positioning is well underway!

Tweet of the Day… This is really random and incredibly accurate!

Truly was the BEST day ever when they let us play with that pic.twitter.com/PQvboaM7wp

If you didn’t see or hear Troy Polamalu’s visit time the Jim Rome Show yesterday here it is for your enjoyment. Thanks to Chad for sending this over from Rome’s studio.

If Cincinnati’s Paul Brown Stadium is often called “Heinz Field West” or Pittsburgh West” then I guess we have to call State Farm Stadium in Arizona “Heinz Field Far West” or “Pittsburgh Super West?” Choose whatever name you want to because I guarantee you’ll see another home team’s stands filled with Terrible Towels and Black and Gold. We saw it in LA against the Chargers and I’m certain we’ll see it again in Arizona. Do not discount the fact that this really matters to the players. Several Chargers’ players were quoted as saying “how sad it was that their stadium had more visiting fans than their own.” It can be defeating to the home team and a huge lift to the visiting one. In other words, Steeler Nation? Do your thing!

I grade the Steelers after each quarter of the season and later today I’ll be posting my “At the Quarter Pole” report card. Pretty incredible when you think about but the Steelers last two quarters have seen them go 3-1 and 3-1 after their 1-3 start.

QH is Presented by 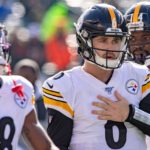