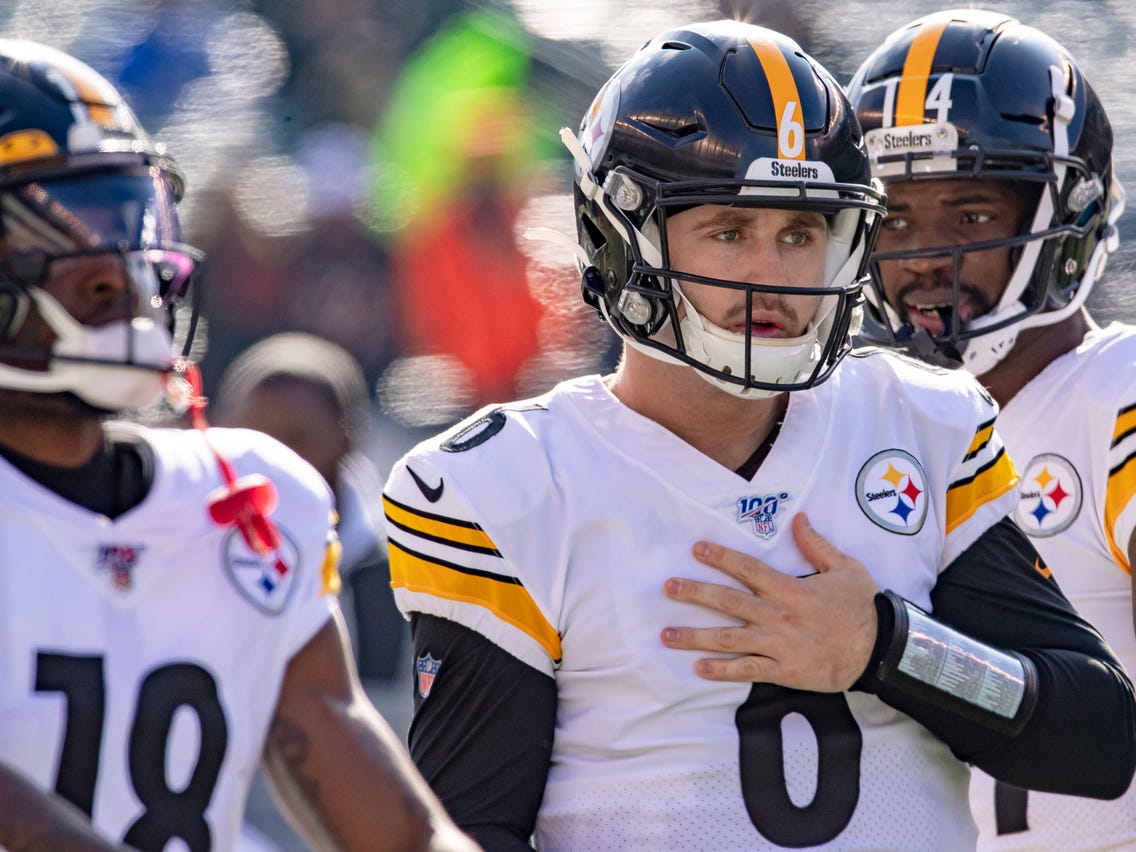 “And down the stretch they come….!!!”  The Pittsburgh Steelers have reached the quarter pole in the 2019 season and there are just four games remaining. Each quarter of the season I offer up grades in several categories. Below are my thoughts on the Steelers through the first 12 games of 2019.

As easy as it is to pick on Offensive Coordinator Randy Fichtner (and boy does he ever give us some ammo), we also have to consider what he’s been working with this part of the season. He’s moved from a second string quarterback to a third stringer, has had a patchwork group at both running back and wide receiver and he had to deal with the loss of his all-pro center for two games.

Credit Fichtner for a solid gameplan against the Browns on Sunday but I also believe he didn’t do his offense any favors in Cleveland or Cincinnati in the two weeks prior. Execution is of course a big part of that and it hasn’t always been consistent. Perhaps the most reliable player over the last four-game stretch has been James Washington. He’s had two, huge scoring plays in the last two games and has come up with some other big catches as well.

With James Conner on the shelf for much of the recent quarter, Benny Snell, Jr has carried the load along with contributions from Jaylen Samuels and Kerrith Whyte who might be finding a niche for himself on this team. The unit is only going to go as far as Duck Hodges can take it. Barring injury, I don’t see him coming off the field the rest of the way. He proved he can be reliable even playing from a deficit of ten points.

It’s no secret that this team is where it is due to this defense. T.J. Watt and Bud Dupree are easily in the conversion as the best edge rushing duo in football right now. Both have contributed sacks, pressures and forced fumbles. What Minkah Fitzpatrick has done to stabilize the secondary is nothing short of incredible.

But this defense has also gotten huge contributions from Steven Nelson who should be on every single “All-Free Agent” team at the end of the season. Cam Heyward and Javon Hargrave have filled the gap created by the loss of Stephon Tuitt and Devin Bush has settled in nicely at linebacker. Nickel corner Mike Hilton has steadily improved his play over the season in both pass coverage and run stopping and Cam Sutton has chipped in nicely as well.

Depending on how things unravel in the coming weeks, the defense will no doubt be tested by mobile QBs Kyler Murray, Josh Allen and Lamar Jackson. If the Steelers are going to get to the postseason it will be on the backs of this group.

Let’s get this out of the way, Chris Boswell has had a terrific comeback from a very poor 2018 season. He’s perfect on all 23 PATs and has made 23 of 25 field goal attempts. Can’t get much better than that. Jordan Berry has also been really good knocking 18 punts inside the 20 and he’s averaging 46.1 yards per punt. The return game is still a struggle. With Ryan Switzer out for the season, Diontae Johnson has assumed the punt return duties. He hasn’t done anything remarkable but he has flashed some moments that display the possibility of some big returns. Overall, the Special Teams’ units are OK but they are being strongly aided by the performances of the kickers.

Mike Tomlin has given us plenty over the years to get upset about it but this season he has done a terrific job considering all that’s he has had to deal with. Winning games with second and third-string quarterbacks is often a feat unto itself but with injuries in so many other key areas, Tomlin has gotten everything and more out of the team. Keith Butler and Teryl Austin have done a terrific job with the defense. The addition of Fitzpatrick goes without saying and the rest of the defense has responded big time. Butler’s return to coaching the outside backers cannot be dismissed either. He may often struggle as a coordinator but his ability to coach up the edge rushers is top notch.

Randy Fichtner is definitely playing without a full deck and you can take that however you’d like. He’s had to work with Mason Rudolph and Duck Hodges at QB and a host of other guys at running back and wide receiver that may not even be on NFL rosters elsewhere. That said, Fichtner often does himself no favors with his play-calling. The team’s red zone efficiency has dropped from first in 2018 to dead last in 2019. The loss of Big Ben is a massive part of that decline but go back and watch the play-calling in recent weeks. He’s putting guys in really bad situations and is doing nothing to change the paradigm. Very little play-action and he seems unwilling to spread defenses out opting instead to use heavy sets much more often. This makes little sense to me as defenses have only gotten faster and faster, why not spread them out?

Overall, the coaching staff has done well to get this team where it is.