Steelers’ Head Coach Mike Tomlin is often criticized for not adjusting soon enough to things that are happening to his team and some of that criticism is warranted. Yesterday we saw a step in the right direction. If you were paying attention when the Steelers’ defense was on the field, the use of flip-cards was used on the sidelines to communicate things into the defense. This is not rocket science. It has been done at every level of football for many years but for this game at least, it seemed to have helped the Steelers. I did not see nearly the lack of organization we’ve sadly grown accustomed to so I give Tomlin and his staff credit for being proactive.

Tomlin also had a rare moment of saying what he really feels in the postgame interviews yesterday. He called the officiating a “joke” and said “we have to do better because guys are getting fired and losing jobs over some of these calls.” As a member of the competition committee, Tomlin’s words carry even more weight and he couldn’t be more correct. Two more very controversial “roughing the passer” calls yesterday against Jon Bostic and T.J. Watt are what lit his fuse. We need more coaches to speak out like this.

Tweet of the Day… Congratulations to JuJu on the birth of his new…. Football?

Thoughts on the game…

If the Steelers learned anything between the Ravens’ loss and yesterday it’s that they are going to have to bring pressure and throw caution to the wind in the secondary. Three and four man rushes just aren’t going to get it down on a consistent basis.

Ben Roethlisberger cannot and I mean CAN NOT throw that ball into the middle of the end zone like that under any circumstances. The only thing I’ll say in his defense is that I realize he’s trying to get his connection going with Antonio Brown but that is not the way to do it. If anything, throw the ball out of the end zone or take the sack and preserve at the very least a field goal opportunity. Horrible decision by a veteran QB.

Prior to the season beginning I wrote a piece about Randy Fichtner, the team’s new Offensive Coordinator. I wondered if he’d be more like Todd Haley or more like Bruce Arians as he’s worked for both. While I see elements of both, I have a major concern that points back to the days of Arians. James Conner got off to a terrific start rushing for well over 70 yards in the first half, most of it in the opening stanza. For whatever reason, Fichtner went away from him and that’s a huge mistake. OCs most often get themselves in trouble when they try to be the smartest guys on the field rather than just doing what works. That was Fichtner yesterday and that was very Arians-like.

Has there been a more important special teams’ player than Rosie Nix in Pittsburgh in the last decade? He just finds ways to make plays.

Please start practicing on Wednesdays again Big Ben. Your accuracy depends on it.

Wish I could tell you what is wrong with Chris Boswell. The good news is that he isn’t Mason Crosby who missed four field goals and a PAT yesterday in Detroit.

L.J. Fort played very well yesterday recording a sack and a recovering a fumble for a touchdown in the second half. He was starting in place of Vince Williams who was out with a hamstring injury.

I’m sorry but I’m still not seeing enough from Stephon Tuitt. For a guy getting paid the way he is I need to see more consistency and a guy who disrupts the offense.

The offensive line did a very nice job yesterday keeping Ben Roethlisberger free from being sacked. The Falcons have two very good edge rushers in Takk McKinley and Vic Beasley but they were held in check.

Monster game coming up this week in Cincinnati. Seems like the Bengals can do no wrong right now. We’ll see… 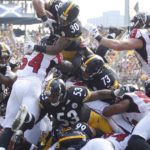 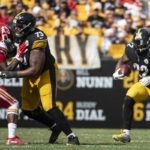