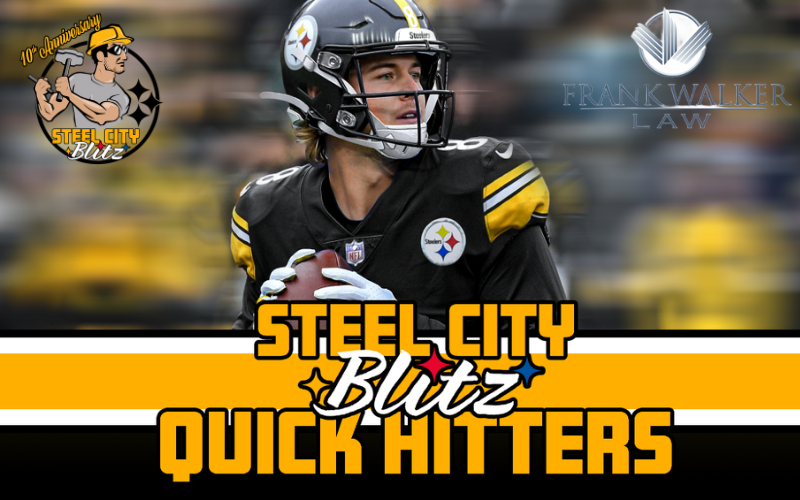 What was thought to be just another afternoon tilt against the Baltimore Ravens is now a Primetime affair. Late yesterday the NFL flexed the game to the Sunday Night Football slot on NBC. That of course means we also get Cris Collinsworth. Sorry I ruined your day… It was just a couple of weeks ago that saw the Pittsburgh Steelers drop a 16-14 contest in the Steel City to the Ravens. That was the game where Kenny Pickett was knocked out early with a concussion. Mitchell Trubisky was solid in reserve in terms of moving the offense but his three interceptions killed their chances. Pickett will now get another shot at the Ravens in a must-win game. Baltimore is already in the postseason but can still play for positioning despite the number one seed being out of reach. They also need to win in order to set up a showdown in Cincinnati for the AFC North title assuming the Bengals win next week against Buffalo. The point is, the Ravens have plenty to play for and won’t be cashing anything in.

Did you miss the SCB Steelers Podcast presented by DEK Roofing Inc last week? We did episode 299 remembering Franco Harris and looked ahead to the Raiders’ game. We also recorded one of our classic “Overtime” episodes as well. Check them out!

Tweet of the Day… Ah the good ol’ days.

#OTD in #SteelersHistory 2004 the #Steelers beat the Ravens 20-7 as @_bigben led his team to a 15-1 season and the playoffs in his rookie year pic.twitter.com/8MHT2FXvOh

Realistically speaking, the Steelers’ offense was pretty ugly Saturday night. It wasn’t until the final drive where Kenny Pickett and company clicked and eventually won the game. All I can really hope for is that this final drive will serve as a catalyst or motivational boost for this young offense. It doesn’t matter who you do it against, you just have to do it and often the momentum builds from there. Baltimore will provide new and more difficult challenges but you just never know.

So You’re Saying There’s a Chance?

The Steelers’ playoff hopes received a bit of a boost with Miami losing yesterday but they will still need lots of help to go along with them winning their final two games. Besides the Dolphins, the Jets and Patriots also own tie-breakers over the Steelers. It’s going to take an incredible series of events for the Steelers to make it but all you need is a chance right?

With the incredibly untimely passing of Franco Harris just days before his jersey was to be retired, one has to wonder if the Steelers’ organization won’t speed up the process of retiring some more jerseys. By our count, Terry Bradshaw, Jack Lambert, Jack Ham, Mike Webster (deceased) and Mel Blount would be next up. We believe Bradshaw will be first in that line and when you consider his recent health struggles it makes sense. I’m not suggesting they rush this but at the same time, watching Franco’s wife and son struggling with that moment Saturday night definitely made me do some thinking on the subject.