Good Monday To You Steelers’ Fans.

Yesterday may have been one of the worst days, strangest days and flat-out head-scratching days I’ve ever had as a Steelers’ fan. I aired my feelings about the Antonio Brown trade yesterday morning but the fallout continues. What we have to understand is that Kevin Colbert and Art Rooney II found themselves in a no-win situation. They knew they had to part ways with Brown. Letting the new league year start and then paying him his roster bonus days later just wasn’t something they wanted to do. Nor could they imagine what keeping him on the roster would have been like (I’m guessing somewhere between getting all of your teeth pulled and having to listen to Cris Collinsworth non-stop on a trans Atlantic flight) but now we don’t have to worry about that. In order to change your culture you have to rid yourselves of what is ailing it. While there are still some lingering things that will need to be addressed, the change can begin.

Does anyone know why former Steeler Josh Harris is so damn angry towards Ben Roethlisberger on social media? Did Big Ben not sign a football for him or something? Seriously, the guy is constantly whining.

Congratulations to Steelers’ linebacker Vince Williams who was married over the weekend.

Tweet of the Day… Wrong. Where else are you going to go Ike where you can make this kind of money for playing football? Oh and if you’re upset about the money that is being made then talk to your union, the weakest one in all of professional sports.

One of the major reasons I hate what the Steelers settled for is that it will likely be a precedent for other players in the future. Look no further than comments by some current players and even one from former Steeler in DeAngelo Williams. I used to think a lot more of him prior to his comments.

I’ll have many more thoughts on this in the coming days but the magnifying glass now turns to Mike Tomlin and to a lesser degree Art Rooney II. There is a laundry list of things that weren’t handled very well.

I’m incredibly happy to be getting back to focusing on the Draft. This AB thing has literally been exhausting.

I want to thank those in the shadows who over the years have grown to trust what we do here at Steel City Blitz. They were vital in giving us information almost in real time it seemed as the trade unfolded. They do not have to do this and they get nothing out of it quite frankly. So thank you for trusting us. 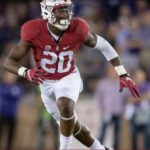