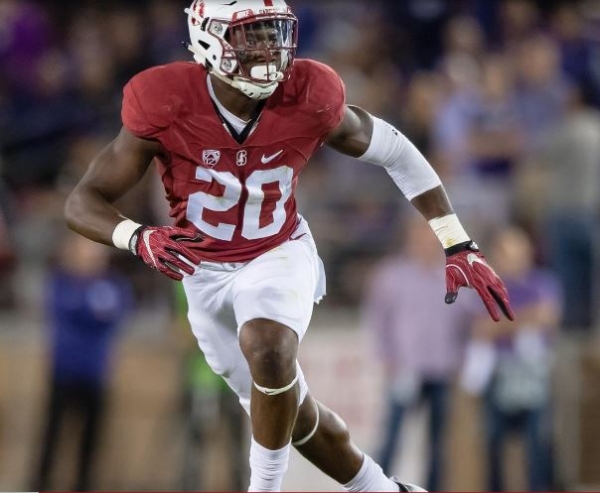 Ever since Ryan Shazier’s injury left him out of football, the Pittsburgh Steelers’ have a glaring need at inside linebacker. The Steelers did an awful job of replacing Shazier in 2018, keeping the position as a top-two need. The ‘mack’ linebacker spot needs filled, and we will see if the Steelers decide to do so via free agency or the 2019 NFL Draft. Today, we observe Stanford linebacker and team captain Bobby Okereke (O-KUH-REE-KEE).

Enormous wingspan. Hustle and effort are never in question, gives 110%. Has experience covering the slot receiver. While engaging blockers, keeps eyes up and reads the play, makes the tackle. Shoots the gap quickly, can cause havoc in the backfield. Moves very fluidly for his weight, sideline to sideline a huge plus. Experience as a special teams player. Instinctive and smart, reads plays rather quickly. Drops in zone coverage well and reads within his zone, picks up correct assignments. When he comes to balance, is a reliable tackler.

Takes on blockers instead of filling the gap. Far too many arm tackles, which won’t fly in the NFL. Can get lost in the crowd and take himself out of the play. Play strength needs a boost, takes most of the hit with blockers and can’t get off blocks well enough yet. Flies to the ball, but too often does he over-pursue. Gives up the cut-back lane on stretch plays by over-committing. Needs to bring feet with him when tackling. Commits early at times which gives the ball carrier time to react and adjust. Overall balance is off, ends up on the ground often.

After Okereke’s solid Combine performance, I had quite high hopes for his film. I came away a bit underwhelmed but there are aspects of his game to certainly build upon. Being an experienced special teams asset is huge, especially as a Steeler. The lack of strength is worrisome, but can be improved with an NFL strength program in his corner. His technicalities as a tackler need some work, but can be improved as well. What Okereke does well is read and react, he is a smart and instinctive player who is around the ball at all times. The experience in both man and zone coverage is also an attractive trait.

Grade: Round 4
Projection: Round 3