Good Tuesday to You Steelers’ Fans.

I am convinced that real journalism no longer exists. The idea that reporters would actually do research and talk to more than once source is from a bygone age and it has definitely transcended into the sports’ world. The continued hit job on Ben Roethlisberger has reached proportions that just don’t make sense any longer. Because a running back who played in two games for the Steelers claims Roethlisberger “fumbled on purpose” the talk shows can’t seem to get enough of it. Do they not look at Josh Harris’ tweets? Have they not figured out that he has an agenda against Big Ben? I’m guessing Harris once asked Roethlisberger to sign a football and Ben said “no” so therefore he’s been mad ever since. Further than that though is the constant need to keep talking about it. From ESPN’s ‘Get Up’ to Colin Cowherd it has completely gone off the rails and why? This is all an effort to bash Big Ben because he isn’t the media darling a Peyton Manning was or a Tom Brady is (he’s got his warts too believe me). He isn’t perfect – we know this – but for the love of God when will this narrative end?

Tweet of the Day… Sorry Mr. Harris but I’ll take the word of a guy who actually spent more than a few weeks with Roethlisberger.

Draft Talk… It seems everyone and their brother believes the Steelers will trade up and take either Devin Bush or Devin White in the Draft next month. While I believe they could definitely benefit from one of these two I think fans have to understand that just because you have a surplus of extra picks doesn’t mean a trade happen. We all need to understand that Kevin Colbert isn’t going to pull a “Mike Ditka” here and trade his entire draft for one guy. That’s never been the Steelers’ style and it won’t be this year either. My point is this; if those two guys both go in the 8-9 picks? The cost to move there would be significant and there’s no guarantee Colbert will pull that trigger. In other words, you best be prepared if both LBs are gone.

Draft Talk Part II… One positive for us to consider when thinking about getting one of those two LBs is that teams have shown a propensity for taking quarterbacks way sooner than they should. I’m hoping this is again the case this time around. The more QBs taken in the first should mean the quicker those linebackers will slide down.

According to Ian Whetstone who is an awesome follow on Twitter, the Steelers have apparently re-worked the contract of Vince Williams to create a bit more cap space.

Did it ever occur to you that once AB’s money ran out that’s when he started acting a fool? Amazing how these internal issues didn’t exist until he needed a new contract. 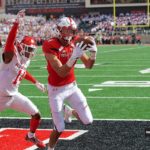