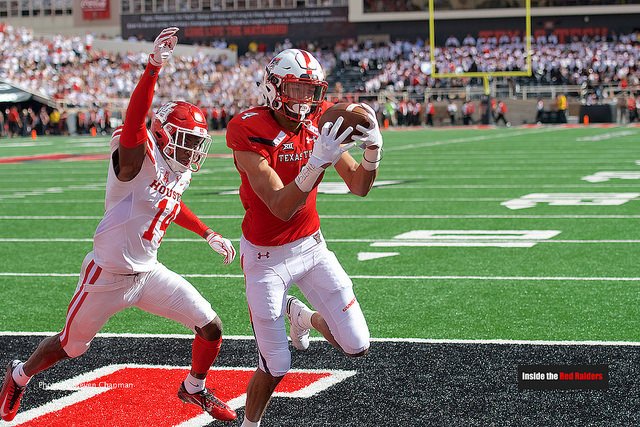 The Pittsburgh Steelers have traded star wide receiver Antonio Brown. This move opens up the ‘X’ position that needs filled via the 2019 offseason. The addition of Donte Moncrief is insurance for the position, but unlikely the definite solidifier. The downfield, heroic, splash touchdown plays, along with the reliability on third downs must be supplemented. An under the radar player who must be put in the spotlight as a potential AB replacement is Antoine Wesley.

Relatively young player at 21 years old, will be 22 in October. Possesses insane length at 6’4″ with an 80″ wingspan, while jumping 37″. Impressive after the catch, shifty and fights for every yard earned. Sharp cuts and great hip fluidity within his breaks. Long strider that carries speed with him. A physical fighter, technically speaking, in run blocking. A redzone threat, runs a beautiful fade route. A true hands-catcher. High points the football with body control through contact. Ability to separate vertically or within other stem routes. Excellent focus. Quick to flip hips and turn up field after the catch in the screen or intermediate route game. Decent hand-fighting to resist a re-route. Uses length to advantage, especially with combative catches.

I'm not the first one to make this comparison for Antoine Wesley, but this looks like Kenny Golladay pic.twitter.com/T6bZtHkU2L

Could do a highlight reel of his blocking, too.

One-year wonder at Texas Tech, not a ton of experience under his belt. Six reps on the bench press is a bit concerning, but given his arm length, it isn’t very alarming. Comes off a bit sluggish off the line of scrimmage at times. False steps off the line of scrimmage too often, needs to commit to the route. Would like to see more physicality off the release. A few drops here and there, although usually from bad ball placement.

It seems as replacing Antonio Brown will be an impossible quest to embark on, but here we are. With his length, big play ability matched with his reliability, Wesley should be a target for the Steelers. Filling into the ‘X’ role and using his length in the redzone along with his ability to separate. Wesley is a sleeper right now who could be a steal of the draft. With only one year of production and at a younger age, Wesley has a high ceiling that could really be beneficial in the long run, and sooner than one may think. My devil’s advocate to Wesley and the Steelers mutual interest would be he does not have much experience from the slot. I assume the Steelers want their new wide receiver to have that interchangeability. I could be satisfied with Wesley as one of the Steelers round three selections, even more thrilled if selected later.

Grade: Round Two
Projection: Round Three-Four

SCB Steelers Quick Hitters: The “Barron Is In” Edition

This is one of the guys I want the Steelers to draft. I get that he only has 1 year of production but I can live with that as to me it means he is just almost where you want him to be at as far as a WR goes. He along with Marquise Brown and N’Keal Harry are the 3 guys I see as fits for the Steelers.