The 2019 NFL Draft is in the books and if you’re looking for me to grade the Steelers’ selections you can forget it. Ask me in three years after I see who makes the roster, who contributes and who actually shows some promise. Then I’ll grade it. If you want my thoughts on how I thought the Steelers did in this Draft? I’ll be glad to tell you so let’s go!

Moving up to grab Bush was a move of both need and want and I expect him to be on the field immediately. You don’t trade up and grab a guy at ten and not get him on the field… The Steelers had a first round grade on WR Johnson who they grabbed in the third. I think this kid has a chance to be a really special receiver… Layne is a big, physical dude on the corner who won’t have to step in right away barring an injury to Steve Nelson or Joe Haden. He has work to do in terms of tackling but man he can cover… Snell was taken a bit early in my opinion but he has the opportunity to be the hammer. He runs well between the tackles and is the type of guy the Steelers have needed to finish games… The selection of the tight end Gentry is one that bothers me. He’s a tall drink of water at 6’8″ but there were better options here and I’m not impressed with his blocking or inconsistent hands… Sutton Smith is a living fire hydrant. His impact will be on special teams but his size will limit him defensively. He could be used a situational blitzer… Buggs will be a bit of a project as a defensive tackle but there are some flashes from his Bama tape that are really impressive… Gilbert is another who will likely have to make his mark on Special Teams first but I can also see him as a guy used in passing situations to take advantage of his speed and tackling… Gray is a big man who will struggle to make the roster with so much depth on the OL. That said, he could be a really nice project for new OL Coach Shaun Sarrett.

Tweet of the Day… Trai was into Game of Thrones last night.

One thing that is still abundantly clear is that the Steelers are cleansing their locker room of negativity. Everyone of the young men selected has high character and very little in the way of problems in their respective paths. Many are citing Devin Bush’s famous foot stomping of the Spartan logo prior to the team’s battle against Michigan State. Was it over the top? Ya, it was. Bush felt disrespected after the Spartans deliberately walked through his pregame warm up. In the grand scheme of things though this isn’t a big deal.

The other obvious tone of this Draft? Speed. From Bush to Sutton Smith to Ulysees Gilbert… These cats can flat out fly to ball carriers. Get ready for some interesting sub-packages this year. 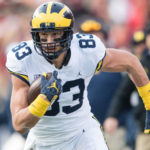