If you’d been paying attention over the last year then the release of Steelers’ perennial Pro Bowl Guard David DeCastro might not be that shocking. That’s exactly what the Black and Gold did yesterday by designating DeCastro as a “non-football injury related” release. The move will save the Steelers about $8.25 million in cap space but also adds over $5 million in dead money. DeCastro was entering the final year of his deal which would have paid him over $14 million. This now means that the entire starting offensive line will be different than the one that ended the 2020 season. How that works out will be anyone’s guess but there’s no question the pressure on this unit just went up even more. DeCastro was unable to participate in any of the team’s mini-camps over the last month and when asked, Head Coach Mike Tomlin declined to say anything. What we know is that DDC battles injuries last season. Everything from a knee to a back to a hernia to an ankle were rumored at some point to be hampering him. It sounds that it was the ankle, which he had surgery on in the off-season prior to the 2020 season, was the major issue. The loss of DeCastro on the OL is significant. The loss of his leadership both on the field and in the locker room will be missed just as much.

After having visited with the Steelers last week, former Pro Bowl guard Trai Turner has decided to sign a one-year deal with the Steelers. Like DDC, Turner battled some injuries last year as well. Pittsburgh claims that Turner is recovered and he’ll immediately plug into the right guard spot. His experience will be huge for this offensive line moving forward.

Tweet of the Day… It’s clear that our terrific graphics guy Aaron needs to right these egregious wrongs immediately! Not seeing 1,2 and 4 is just a crime.

With myself in the wilds of Michigan, Ben took over hosting duties while Ian and I joined in. We discussed DeCastro, the offensive line, the statement about Training Camp not going to Latrobe again and much more. Check out the SCB Steelers Podcast 226 presented by DEK Roofing Inc.

Several NFL pundits, mostly the national ones, suggested that the Hall of Fame awaits David DeCastro. I don’t think so. While DeCastro has been the Steelers best and most consistent lineman along with Maurkice Pouncey, I don’t think the accolades he’s achieved are enough to get him into the Hall. Is it possible that he could get in on a veteran’s committee some day? Perhaps, but when you also consider DDC doesn’t have a Super Bowl win that doesn’t help his case either. Like it or not that is often a key factor for many voters. 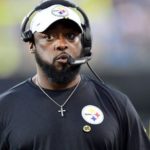