The first of two big dominoes fell yesterday when Bud Dupree agreed to a deal with the Tennessee Titans. Dupree moves to the AFC South on a five-year, $85 million deal with $35 million guaranteed. That works out to about $17 million per season. If you think for one second the Pittsburgh Steelers were going to afford that then I’d like to welcome you back to reality. The former first round draft pick had an interesting arc during his time in the Steel City. His first few years he was average at best but he worked hard to make himself into a much better pass rusher and that’s exactly why he’s getting paid. We expect news on the JuJu Smith-Schuster front today but here’s what I can tell you. Based on deals for guys like Corey Davis, who signed with the New York Jets for three years and $37.5 million… There’s NO WAY JuJu remains in Pittsburgh. He can command significantly more than that and the Steelers can’t afford it. Guard/Tackle Matt Feiler has agreed to sign with the LA Chargers for three years and $21 million. This was the biggest surprise of the day if you ask me. Feiler’s play at guard in 2020 was sub-par and we figured he had probably forced his own price tag down but I guess not.

And Now the Good News

It wasn’t all bad news on the South Side yesterday as Cam Sutton signed a two-year deal worth just over $9 million. I’ve said for some time that between he and Mike Hilton, Sutton is more important because he’s more versatile and can cover better. His tackling and aggressiveness are concerning to be honest but if the Steelers did in fact “choose” Sutton over Hilton (we don’t know if that’s the case yet), then they went in the best direction. His deal will only count about $2 million against the Steelers cap this season.

Many think that their bank account, social status, number of followers, material items etc…define them. We all put our pants on the same way. #stayhumble #tuesdayvibe pic.twitter.com/MJmIHoOSGv

To the surprise of few, General Manager Kevin Colbert has signed a one-year extension. He will be with the Steelers through the 2022 NFL Draft. Here’s why that is important. This coming season is Ben Roethlisberger’s last. The Steelers are likely to have three or four comp picks which could be used to move up in the draft in ’22 to select Big Ben’s successor. I realize some of you may not want Colbert involved with that and I do understand this. The reality is that with as much change as this team is going through both in terms of personnel and with the cap, you want an experienced person involved. The one-year deal also gives Colbert the flexibility to leave when he’s ready.

Georgia Tech and Temple are the only schools on the docket for today. Tomorrow begins a two-day run that will include Auburn, Georgia, Pitt and Buffalo among many others. 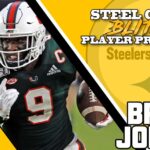