Pittsburgh Steelers’ General Manager Kevin Colbert spoke to assembled media members yesterday at the NFL Owners Meetings in Arizona yesterday. There was really nothing of note that he said but I think what was made very clear was that having those ten draft picks will give him plenty of options when the Draft rolls around in one month. Common theory holds that there’s no way the Steelers will use all ten of those draft picks. I happen to agree with this but there is a catch. If a player the Steelers want is available in the first round then they have the ammunition to move up. But that’s no guarantee that they’ll do this. What actually might be more accurate to say is that the Steelers could use those extra picks to move up in the second or third round. Colbert is not going to be forced to trade up in round one just because we think it’s a good idea. If the player the Steelers want isn’t there it isn’t happening.

Much like Art Rooney II last week, Colbert spent little time talking about the two players who are no longer Steelers and I’m not talking about L.J. Fort and someone else. The strategy to stop mentioning those two is a sound one. The media will likely continue to ask over the next several months so it’s a good idea to move on now.

Tweet of the Day… Pretty sure this was in reaction to the retirement of Gronk.

There has been some talk that LSU LB Devin White came off as a bit arrogant and full of himself during his Pro Day in Baton Rouge. His tweet about demanding $100 million on his second contract didn’t help but I would offer this. Is he arrogant or is he a potential problem both on the field and off? He wouldn’t be the first pro football player to be arrogant now would he? If the Steelers have a legitimate shot at him and pass then I guess we’ll know just how bad his attitude.

Remember the ‘Young Money Crew?’ That was the name Mike Wallace, Antonio Brown and Emmanuel Sanders gave to themselves while in Pittsburgh. They’ve all made plenty of money but with Sanders’ odd comments and accusations this week the trio of immaturity now looks complete.

Steelers’ HC Mike Tomlin will address the media Tuesday from the Owners’ meetings for the first time since his season-ending presser back in January (almost 90 days if you’re keeping score at home). I wonder what he’ll be asked? /Rolls eyes 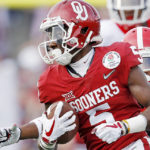