The Fourth of July for 2018 is in the books. Of course this won’t stop people from continuing to launch fireworks for the next few days terrorizing dogs across America but I digress… With the hot dogs swallowed, the beer swilled, and the bombs done bursting in air, we start to turn our attention just a little bit more to the Pittsburgh Steelers. Independence Day is always kind of a ‘milestone’ if you will. It’s a signal that football is coming closer despite the fact that summer technically runs into September. For the players, they feel it too. You likely saw the social media posts of guys like Antonio Brown and Anthony Chickillo celebrating the day and they know the grind is coming. In less than three weeks the Steelers report to Camp in Latrobe and the grind begins. As Ben Roethlisberger recently said this period is about balancing hard work and rest. Let’s hope the Steelers continue to do both as we the fans impatiently await the return of our team.

Did you miss the Steel City Blitz Steelers Podcast 80 presented by 26shirts.com/Pittsburgh this week? We were joined by Sigmund Bloom of footballguys.com who is a big Steelers’ fan and knows his stuff!

Tweet of the Day… Can’t say I’ve ever done this before Trai.

Does anyone else try to make the square shaped Wendy’s hamburger patties when all they have is regular bread left and fail every time? Or is that just me? ??‍♂️

Jerome Bettis commented on the current stalemate between the Steelers and Le’Veon Bell. “Le’Veon, you’re not going to be as good going somewhere else because they’re not going to have the offensive line, they’re not going to have the quarterback, the receivers that they have in Pittsburgh,” Bettis said. “You have a full complement around you that allows you to be as great as you want to be.” Well, I do see his point. How many teams that could afford Bell in 2019 will have the talent around him he has now? Very few if any.  Quote courtesy tmz.com

I’m not going to post them here but Jason Pierre-Paul posted photos of his hand following his fireworks accident three years ago on social media. Let me just say it looks more like a crab claw than a human hand.

Among his many great points Sigmund Bloom mentioned on the podcast this week, he addressed the infatuation the Steelers have with Tyler Matakevich. While we have strong concerns about ‘Dirty Red’ as a starter, Sigmund stressed the fact that defenses have become so specialized that you really can’t talk about just 11 guys anymore. You have to actually discuss 15-16 or more guys who may be on the field as often as 50% of the time despite not being a “starter.” I need to say way more from Red before I buy into anything the Steelers are selling I can tell you that. 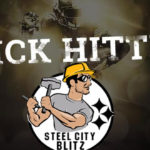