SCB Steelers’ Quick Hitters: The “Bring On the Jags” Edition

Obviously if you’re from the Pittsburgh Area you could take today’s title a couple of ways but in this instance we’re talking about the Jacksonville Jaguars. By way of their 10-3 win over Buffalo, they will be the Steelers’ opponent in the Divisional Round of the playoffs next Sunday at 1pm Eastern.

I do not need to tell you what the Jaguars did to the Steelers back in week five. Not only did they run the ball at will on the Steelers’ D but they also picked off Ben Roethlisberger five times and ran two back for touchdowns. The secret to this game really isn’t a secret. Stop the Jags’ running attack and put the game in the hands of Blake Bortles who threw for less than 100 yards against Buffalo. Offensively, this Steelers’ team is far better than it was in the earlier matchup. Jacksonville has an excellent defense but I expect a Steelers’ win and you should too.

Tweet of the Day… He came back alright Trai. Again, the NFL Concussion Policy is a complete joke.

He better not let Cam come back

Certainly can’t be disappointed by the recent video of Antonio Brown running routes against Chad “Ochocinco” Johnson. I am not however ready to declare him 100% ready to go. I’ll leave that to the Steelers’ medical folks.

If you’re asking yourself after yesterday’s performance how in the world Blake Bortles can beat the Steelers…. Well, he may not have to and that’s exactly what Doug Marrone wants. If you go back to the earlier matchup, the Jags forced three field goals by the Steelers and only had one drive of any substance. The offense put up 16 points while the defense put up 14 on two pick-sixes. What’s the point with Bortles? If they get a lead and can average four yards a crack then he really isn’t needed to do anything. That’s why the Steelers will look to get out early and often.

Our favorite grouchy Uncle Ed Bouchette of the Post-Gazette reports that the NFL does not have rules against padded practices during the postseason. During the regular season, teams are limited due to the CBA. Maurkice Pouncey commented this week that the Steelers had two padded practices during their bye weeks that were as intense as Training Camp.

One guy I am demanding a big postseason from is Stephon Tuitt. Cam Heyward is going to see double teams and Tuitt has to make the opposition pay. Despite his big payday before the season began, Tuitt has not lived up to it in my opinion. 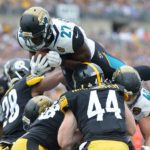