I understand. I really do get the hype over the Cleveland Browns. It’s an exciting time for their fans because they seem to have put all of the pieces together behind an exciting new quarterback and young defense. But in this age of hyperbole and amazingly quick takes people are forgetting that you still have to do things on the field. And to a point the Browns did that last year winning five of their final seven games en route to a 7-8-1 record. This was seen as “progress” after years of futility which included an “O-fer” just a couple of years ago. Those five wins came against teams that all finished below .500. So with this in mind I was surprised to see former Brown and future first ballot Hall of Fame offensive tackle Joe Thomas say yesterday that the Browns would go 5-1 win the AFC North. I’m all for optimism and hope and looking in the positive direction but can we please slow the hell down here a minute? There’s a part of me that’s excited once again for the rivalry that for the last 30 years has been essentially dead in the water but this new found spirit has a down-side too. Where have all of these Browns’ fans been the last three decades? Suddenly I’m seeing shirts and jerseys and hats oh my! I feel bad for the real fans of the Browns. The ones who have stuck by them and weren’t afraid to keep representing their team no matter what. Many of these “new Browns’ fans” are just that because they have Baker Mayfield or Odell Beckham, Jr jerseys. Chances are that if you’re a Steelers’ fan reading this you too have some emotional feelings. If you’re an older Steelers’ fan who can remember the 1980’s then you know there were those amongst us who stopped wearing their Steelers’ gear. Personally, I don’t understand that but that’s just me. Bottom line is we need to let the Browns prove their worth before we start crowning them as anything more than paper champions.

I am incredibly excited to announce that we will be opening a storefront here on SCB. This is in the early stages but I think you’re going to love the stuff that’s being offered. Stay tuned.

Jersey give away check my insta for more @JoshuaFrazier99 pic.twitter.com/ooVF3ynz31

Frazier last week announced he was done with football. It’s a good reminder and a good lesson for all of us that not everyone who has the talent and drive to become a professional athlete truly wants that life. As the great Chuck Noll said, “It’s time to get on with your life’s work.”

The Steelers continued signing their draft picks yesterday as Derwin Gray, the seventh round offensive lineman from Maryland agreed to a four-year deal. He joins Isaiah Buggs, Sutton Smith, Diontae Johnson and Benny Snell as other selections who have signed.

Last season I predicted that Vance McDonald would make the Pro Bowl if he stayed healthy all season. Well, I came up a bit short just as he did. He managed to play in 15 games, caught 50 passes and recorded four scores. I have to believe if he can play in the same amount of games this season then those numbers will rise even more. 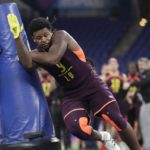