If you didn’t already know, money trumps loyalty. That’s not a bad thing, it just is what it is. Alejandro Villanueva, the former Steelers’ left tackle, is now a Baltimore Raven. He signed a new deal with them yesterday for two years and $14 million. It is expected that he’ll slide over and play right tackle at the current time. You already know Villanueva’s story – a former Army Ranger who did tours of duty in Afghanistan – he made himself into an NFL left tackle tasked with protecting Ben Roehtlisberger’s blind side. At 32 years old however, the Steelers knew it was time to move on from him. Many believe that he was the Steelers’ best lineman last season and maybe he was. David DeCastro certainly wasn’t himself. Matt Feiler was awful. Chuks Okorafor was solid in pass protection but struggled in the run and Maurkice Pouncey saw the writing on the wall and retired. In other words, saying Big Al was the “best lineman” really isn’t saying much. He spent a lot of time in the lap of Big Ben as he was getting rid of the ball. I’m not sure how he fits in the offense that Baltimore runs but let’s put it this way; I’m glad we’ll be seeing him twice a year.

Tweet of the Day… This is a situation worth watching. The young man opted out of playing in 2020 due to the pandemic. He was training in preparation for the season away from the Broncos’ facility and blew out his Achilles. Mahomes is asking a question all NFL players need an answer to.

So they are going to take his contract for working out in the off-season??? https://t.co/rJK7xrqpv6

Lost in much of the excitement of the Draft was the fact the Steelers extended the contract of Mason Rudolph by a year. This was done in large part due to the fact that they had ZERO quarterbacks under contract for the 2022 season. I’ve been told by those close to the team that Rudolph feels he’s ready to take on the starting job and was quietly disappointed that Roethlisberger didn’t retire. With a relatively average QB class coming in the 2022 Draft I will be curious to see how Kevin Colbert approaches the QB position. If they don’t have their sights set on anyone then I can see a free agent being brought in to join Rudolph.

I’m cautiously optimistic about Zach Banner and Chuks Okorafor at the right and left tackle spots respectively. But I really want to stress the word “cautiously.” Banner’s experience is limited to less than one game as he tore his ACL in the season opener in New York. Okorafor filled in admirably and now shifts over to the left side where becomes Big Ben’s new “blind side protector.” Banner is a wonderful story. A young man who has worked his tail off to get his body into the proper condition to be an NFL starting lineman and has endeared himself to the fans as well. But there’s so little to go on in terms of what to expect. At least with Okorafor, you know he’s a solid pass blocker but can he provide enough in the run blocking department? When Training Camp opens, the edges is exactly where my eyes will be glued. 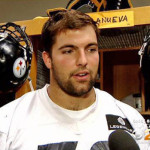