The Pittsburgh Steelers chose not to offer 2018 first round draft pick Terrell Edmunds his fifth-year option yesterday. I detailed, in my opinion, why they chose this option in this piece right here. Ultimately, Edmunds joins a list of about 11 first round picks from that year who weren’t offered their option. This does not mean Edmunds can’t sign a new deal with the Steelers but it certainly sends the signal that it isn’t likely. The Steelers already granted the option for Minkah Fitzpatrick who was drafted about 20 spots ahead of Edmunds by Miami.

The Steelers signed CB DeMarkus Acy to a one-year contract and waived TE Charles Jones and P Corliss Waitman. Jones dismissal was a direct result of the drafting of Pat Freiermuth while Waitman was released due to the drafting of Georgia Tech punter Pressley Harvin III. Acy went undrafted in 2020 out of Missouri and spent some time with the 49ers last year.

Tweet of the Day… So true. I would leap into traffic from the backseat.

No matter how bad you think things are……you could be in this car.. pic.twitter.com/SwlXm5TVSL

One of the more important things that happens immediately as the Draft ends is the signings of those who went undrafted. Often times teams find a gem in this group but for the most part these players will be cut in Training Camp if not prior. Here’s the list of guys joining the Steelers following Saturday’s draft proceedings. WR Rico Bussey (Hawaii), WR Isaiah McKoy (Kent State), S Lamont Wade (Penn State), S Donovan Stiner (Florida), CB Shakur Brown (Michigan State), CB Mark Gilbert (Duke), LB Jamar Watson (Kentucky) and LB Calvin Bundage (Oklahoma State) List courtesy steelers.com. Of note is Brown who I had mocked to the Steelers in the fourth. My understanding is that he was the very first call the Steelers made but I was still way off with him. Not sure why he dropped out of the Draft.

Steelers’ Hall of Famer Terry Bradshaw wasn’t having any of what Aaron Rodgers was dishing in the past week during his appearance on a radio show. This link is courtesy of profootballtalk.com. While I largely agree with Terry I also think ARod has a point. My team is very close to the top and the addition of a top receiving threat might put us at the top yet the team trades up for a QB? This is a guy who won’t even see the field so how does it help us get better? I understand that angle from Rodgers but come on man. Grow up a bit. 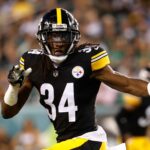 Edmunds’ Fifth-Year Option Was Doomed for One Reason