There are many old cliches about NFL backup quarterbacks but the one that rings the most true is that on most teams, the backup QB is almost always the most well-liked player on the team. Why? There really is no ‘one single reason’ for this but most of the time it can be attributed to the backup’s unexpected performance in a recent game. The Steelers have now gone through this twice in recent weeks. When Mason Rudolph played in relief of the injured Ben Roethlisberger, he played fairly well which of course led to many superlatives about him and his future. Just a few weeks later, Rudolph was knocked out of the game and enter Devlin Hodges. Admittedly, ‘Duck’ performed well and that has already led people to suggest that maybe he is the Steelers’ QB of the future. Can we please slow the hell down on all of this love? I’ve liked Hodges a lot too. We were among the first to suggest we felt he was good enough to warrant Josh Dobbs being traded and that’s exactly what happened. This does not however mean that we or I see Hodges as the next Super Bowl winning QB in Pittsburgh. As with Rudolph, let’s give Hodges time to see what he can do over the course of several games. Hell, we don’t really even know what Rudy is capable of yet? Slow down Steelers’ fans.

It’s now Friday and the Steelers have yet to make any moves regarding their quarterback situation. At this point, I don’t think it’s coming because everything I’m gathering tells me Mason Rudolph will clear concussion protocol and should play on Sunday Night. Obviously if he doesn’t clear it today the Steelers will be forced to bring Paxton Lynch to the active squad from the Practice Squad. They’d prefer not to do that because it means having to cut someone from the roster.

Tweet of the Day… Exactly what I was discussing above.

Former Western Michigan Bronco Linebacker Robert Spillane has signed with the Steelers Practice Squad. He was part of my alma mater’s unbeaten season and trip to the Cotton Bowl a few years ago. He could prove to be an excellent Special Teamer and reserve backer if needed. He’s not great in coverage but he’s excellent against the run.

Notes… Have to keep an eye on those top four guys for the LAC. Adderley’s loss would hurt an already depleted secondary and Ingram not playing would be a major loss for the front seven… I’m going to assume Badgley gives it a go today and they make a decision from there… As for the Steelers it looks like Chickillo will finally return this week… My confidence in both Vance McDonald and Mark Barron playing Sunday night is dropping significantly. 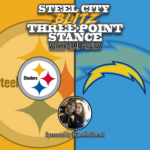