SCB Steelers Quick Hitters: The “Back to Work” Edition

Like many of us, the Steelers return to work today after an extended weekend. There are many things to be keeping an eye on this week and through the Final Phase of OTAs. First of all, the Steelers should be welcoming back David DeCastro who missed the first week due to the birth of a child. Secondly, the Steelers will continue to implement base playbooks on both sides of the ball while experimenting along the way too. Look no further than Sutton Smith getting time at fullback last week… Above all else is the overwhelming need to remain healthy. The injury bug has stayed away to this point and I’d like to be saying that next week as well.

I mentioned James Washington yesterday dropping some weight in preparation for the coming season but JuJu Smith-Schuster also made a comment that needs more attention. JuJu told Steelers.com “He is not jumping every time he catches the ball. He is running through all of his routes. Powerful, strong. His conditioning is up there.” That’s important because getting a receiver to really adjust to how he plays isn’t easy. When you’ve been doing something a certain way for most of your career breaking the habit can be difficult. Glad to see he’s making progress.

100 days from today the 2019 NFL Season officially kicks off with the Packers and Bears. The Steelers of course will have to wait until the following Sunday night when they open in New England. If you’re one of those already counting this as a loss I’m not going to admonish you – I get it – but every year is new and every year is different. I’ll remain optimistic.

Have you visited our official SCB Store yet? We have some really cool designs and several more on the way. From the site to JuJu, Devin Bush and even more. Check it out!

Was thinking about Alejandro Villanueva yesterday. My father served in Vietnam, two tours in fact, and I often reflect on the things he told me about his time there. He didn’t share much other than some big ideas and general anecdotes but I know from my mother the other side of what he witnessed. So with Big Al I got to thinking about his experiences in combat and then I thought about what it must be like to be able to serve your country and then live out another dream playing in the NFL. I have to imagine that when someone criticizes his play (which I’ve done) that has to be pretty small potatoes for a guy who has seen and experienced what he has. I’m a big fan of perspective.

There is still time to get your son or daughter signed up for the Ben Roethlisberger Youth Football Camp held at the Steelers’ Practice Facility on June 16th. Having witnessed it first-hand I can tell you it’s an experience your child will never forget. 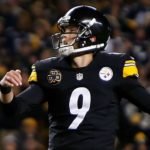