If you didn’t catch my piece on Cam Heyward last night, here it is. I have the utmost respect for this young man and not just because he played through some pretty extraordinary pain on Sunday but because he is what we all want our Steelers to be. He’s tough, he’s a good man off the field and he’s a leader. Losing him for the season is a brutal blow to a unit that may have already been on its death bed. He’s not just a good player, his presence means so much to this team that is is often impossible to gauge. I wish him a speedy recovery and can’t wait to see him back in 2017. Thank you Cam for your hard work and dedication.

Lost in all the discussion following the loss was the debut for tight end Ladarius Green. He was targeted four times and had three receptions for 30 yards so he was largely a non-factor but I’ll say this; for a guy who hasn’t seen the field in forever that isn’t awful.

One of the biggest blows to defenders of Mike Tomlin, and I have been one for a long time, is the lack of defensive talent drafted. Go back and look at the last five drafts by the Steelers and see how many defensive players have actually become players. It isn’t nearly enough.

I really hope I’m wrong but I’m hearing the problems in the locker room are bad. Huge divide between veteran players and younger players. Not everyone on the same page. This is how you get to 4-5.

The Steelers had free agent defensive end Bobby Richardson in for a visit on Tuesday. With Cam Heyward out for the season, this shows how little confidence they have in L.T. Walton.

I’m of the mindset that both Sean Davis and Artie Burns are both going to be OK. Yes, they are making mistakes but they are also learning on the fly  which wasn’t thought to be the case when the season started. 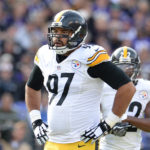 Here’s What the Other Steelers Can Learn From Cam Heyward