The pot is growing…. We are now up to $1,900 as we head into week 10 of the NFL Season. This week’s goals were selected by Michael Wittman who you can follow on Twitter @Wittman7. Remember! All entries due by 8pm Eastern Saturday night.

-Winner will receive $1,900. If multiple winners in one week, the pot splits accordingly. If there is no winner the pot will increase by $100 per week until a winner.

‘Nail the Number’ Week 10: The Steelers Aren’t Winning But You Can! was last modified: November 16th, 2016 by Steeldad
#steelersLe'Veon BellNail the NumberPittsburgh Steelers 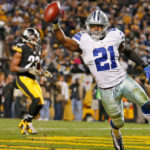 Breaking Down the Steelers’ Break Down Against Dallas