Good Monday to you Steelers’ Fans!!

The Pittsburgh Steelers are 9-2 and had to fight tooth and nail to beat a short-handed Green Bay Packers’ team 31-28 on a 53-yard field by Chris Boswell as the clock expired. There were lots of things to like and plenty to be concerned about. Here’s what I’m thinking after last night…

With the game on NBC, that meant Tony Dungy would be in-studio and he offered some thoughts on what he saw Friday at the Steelers’ practice. Dropped balls and blown coverages were the first two things he said and he was spot on. The only thing missing was the bad penalties. This was yet another example of a Mike Tomlin team not being 100% focused and prepared and I don’t care what anyone tells me.

Speaking of penalties, in the first half on successive drives, the Steelers were penalized on defense and that led to a Packers’ touchdown. Then an offensive penalty killed a drive. Whether these penalties were questionable or not doesn’t matter. The Steelers have to be better.

There are no superlatives remaining to describe Antonio Brown. His catch on the sideline with :13 remaining may have been a top five catch of all-time for him given the situation.

Ben Roethlisberger was picked twice and I don’t have to tell him he needs to avoid those turnovers. That said, the last two weeks he’s thrown significantly better than at any other point in the season. Keep in mind too he was victimized by several dropped passes. His scrambling last night also proved to be huge as well.

I feel like I let Steelers Nation down tonight though… I’m going to do whatever it takes to get back on the field. Worst feeling of my life… pic.twitter.com/qO4MtOPIeS

Ryan Shazier returned to the game in the fourth quarter after hobbling off the field. He is not replaceable. If he’s out, this D is toast.

Cam Heyward is a game-changer. His play and overall leadership in the second half was again crucial to the victory.

I’ll never understand Mike Tomlin’s “clock management.” Why he took a timeout late in the first half and why he didn’t take one sooner in the second half are beyond me. Obviously the outcome turned out fine, but I’m still scratching my head.

The secondary is a mess right now and there’s a few reasons. Artie Burns is not playing well. He’s late on his breaks and his tackling, while better last night, has been sub-par. Secondly, Mike Mitchell continues to struggle when diagnosing plays. He’s consistently late on reads and I believe his absence from practices has affected the communication. Lastly, Joe Haden’s absence looms larger than I thought it would. Coty Sensabaugh got beaten on a third down play with a double-move. That should NEVER happen on third down.

Can’t believe it’s taken me this long to get to it but Le’Veon Bell was huge last night. The running, the receiving, the blocking… that’s why he demands the money he does whether we like it or not.

I’m tired of hearing about the Patriots. Mike Tomlin shouldn’t be mentioning them and fans shouldn’t either. They are one opponent out of 16 this season. Beating them in the postseason is what matters.

Todd Haley had a MUCH better night last night than Keith Butler did.

Pittsburgh is not getting nearly enough QB pressure out of Bud Dupree and to an extent T.J. Watt. While I love the push by Heyward and company Dupree and Watt have to get to the QB more often. Don’t be surprised if we see more James Harrison in the coming weeks.

I was really impressed with Mike Daniels and Blake Martinez of the Packers last night. Both were very difficult to block and they hustle on every play.

Very disappointed in the turnout for the Steelers’ Hall of Honor class. There were 27 inductees and I’m guessing less than half showed up.

Mike Hilton in the slot is a game-changer. He is so quick into the backfield that he literally alters plays by himself at times.

Hell of a kick Chris Boswell. Dude has ice in his veins.

The prettiest pass by Big Ben all night may have been one that wasn’t caught. His ‘tear-drop’ over the linebacker and into the buttery hands of Jesse James was as good as it gets. Unfortunately James dropped it.

The most disturbing thing about the defense last night was Green Bay’s ability to run the ball. They were getting huge chunks on first and second down which made life much easier for Brett Hundley. They were better in the second half but that’s a huge concern in my book.

The Steelers are closing in on the division title and with Jacksonville losing in Arizona yesterday it is much closer to a two-horse race between them and that team in Boston. 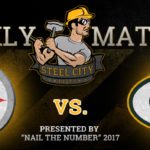 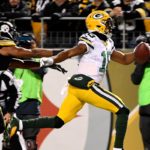 Shazier play was sub par, way too many bad angles. I think everyone overestimated this receiving corp. they drop a ton of catch-able balls. Todd Haley’s plays are plain. I was looking for that play were he runs 4 curls at the same time. He ran it a half dozen times [SMH]. But you are right, it’s a win and believe me a lose would have tasted pretty bad. Now it’s time to sharpen the pencil and it shouldn’t matter who we are playing.

Despite the lack of running game early I thought Haley had a better game than normal. Butler however? Ouch.