The regular season is in the books! The Pittsburgh Steelers defied my expectations (I had them at 10-6) and finished 11-5 and the champions of the AFC North. It wasn’t easy, but the Steelers defeated the Cleveland Browns 27-24 in overtime yesterday. As I do each Monday, here are my thoughts on yesterday’s finale.

I believe two things occurred during the first half. The Steelers were very much going through the motions on both offense and defense. The second thing was that Mike Tomlin was having none of it. With his team down 14-0, I thought Tomlin became as animated as I’ve seen him in awhile. He wasn’t happy with the effort and  guarantee the team heard about it at halftime.

I’m not so sure that was Landry Jones’ final game as a Steeler. Yes, he can look awful at times but he knows the offense, will be relatively cheap and probably won’t demand a lot of attention on the free agent market.

Have to like what Demarcus Ayers is doing in just two games so far. He has really good quickness and has that extra gear which allows him to pull away from defenders. He’s not super fast, but in the slot, ya don’t need to be. The quickness and ability to get open are what’s important.

Sean Davis had a sack and a fumble recovery in the first half. He has become an incredibly important part of this defense and a guy that opposing offenses have to account for at the line of scrimmage.

I can’t say enough about DeAngelo Williams. His effort to get out of the end zone on several occasions with the offense backed up was incredible. Not only that but he also had some nice runs to move the sticks and of course an terrific catch and run for a TD.

Speaking of effort how about Darrius Heyward-Bey? He could have easily just jogged after the Browns’ player who intercepted Landry Jones pass and looked to be heading in for a score. Instead, DHB hustled his tail off and knocked the ball loose for an eventual touchback. Plays like that are often forgotten because they don’t show up in the box score.

As much as I love B.J. Finney when he fills in at guard, he struggled a lot at center yesterday. The Browns brought a lot of ‘A’ gap pressure and he struggled to pick it up. Some of that is communication but some is also the ability to think on the fly and it wasn’t good especially early.

They fight in hockey and its five minutes. Fight in the NFL and its 50k

Fitzgerald Toussaint made some moves that I didn’t know he had.

Toussaint also struggled with blitz pickup as well and just isn’t a third down back.

Absolutely loved the decision by Mike Tomlin to go for the fourth and two in overtime. Could have easily sent Chris Boswell out to tie it up but why? With nothing on the line, playing to win and get his guys off the field was the right move.

Can’t say enough about Lawrence Timmons this year. I went into this season thinking this would be his last in Pittsburgh because he was looking slower especially in coverage in recent years. While the coverage skills are still so-so he’s been a much-improved tackler and his impact plays on D have been through the roof.

While the video and audio of Mike Mitchell arguing the facemask call was highly humorous it also raises an interesting question. Doesn’t the league need to do more about offensive players grabbing the facemask of defenders trying to tackle them? It has become a more common trend in recent years.

OK… The Steelers will host the Dolphins at 1:05pm Sunday. I will see you there! 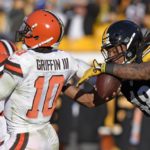 Steelers Have Work to Do Before the Dolphins Arrive