One thing we Steelers’ fans aren’t always used to is ‘Draft Talk’ happening this fast. In past seasons it’s always felt like there was a bit of a reprieve between the season’s end and when scouting draftees fired up. There has been no such reprieve this season and already the “Hyperbole Machine” is in full effect. What is this “machine?” Here’s an example… Last year the hot name on the list of most Steelers’ Draft Experts was Auburn edge rusher Carl Lawson. Despite injury concerns and a questionable motor, many thought he was clearly going to be the Steelers’ first round draft pick. Then the draft rolled around and he didn’t go until the fourth round to Cincinnati. What’s the point in all of this? The point is that despite all of the film, measurements, interviews and what-not, amateur scouts will fall in love many, many times. And it’s already happening and it isn’t even February!

Did you listen to the Steel City Blitz Steelers’ Podcast presented by 26shirts.com/Pittsburgh last night? Click the link to get some great insight into last year’s draft, what the Steelers’ options with Le’Veon Bell are and why Mike Mitchell needs to be replaced. You can find us on iTunes, iHeart Radio, Spreaker and SoundCloud!

Tweet of the Day… This was tweeted by our Social Media Darling yesterday and I’m glad she did. If you want to have articles on injuries in the NFL that’s fine but to show a young man who is now in a wheelchair writhing in pain and grabbing his back is absolutely tasteless. Poor choice Sports Illustrated.

This is tasteless and very classless by Sports Illustrated. Shame on you. pic.twitter.com/u33HA4hr2S

The inevitable comparison between Josh Allen, the quarterback coming out of Wyoming and Ben Roethlisberger have already hit the presses. I guess that’s just the normal process these days. Find someone comparable and go from there.

Lot of talk locally about Dejan Kovacevic who left the Trib to form “DK on Pittsburgh Sports.” Supposedly there is a damaging article coming from deadspin.com. Like other bloggers we hear things and we know some are true and we know some aren’t. All I can say is that in my communications with DK he has always been very professional and very helpful. It’s been several years, but that’s where it was left. I don’t wish to see anyone fail and hopefully his recent changes can get things straightened around for him.

I think we do a really good job here at SCB and like everyone else we are wrong as often as we right. That said, I’m very proud of the work that Ian and Ben did on the recent Bell article. I encourage you to read it and listen to the podcast where Ben breaks it all down. There is SO MUCH misinformation out there about Bell’s status and how the Steelers can proceed. They have it all cleared up for you! 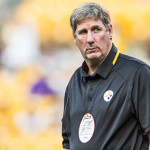