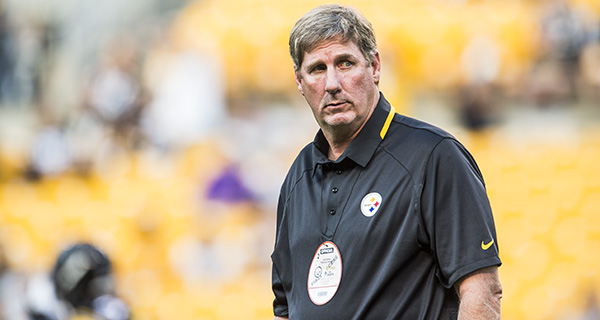 A13-3 regular season, a first-round bye, and the hottest offense in the league…everything was set up for a Super Bowl run. Instead, the Steelers went one-and-one in the playoffs and now face numerous questions this offseason that must be answered if they expect to have a chance at the title in 2018.

What will the offense be like without Todd Haley?

It was a relationship that was doomed from the start and now it’s finally over.

In the first major announcement of the offseason, the Steelers allowed Todd Haley’s contract to expire, thus ending his tenure as offensive coordinator. While many fans will certainly be happy with this move, no one could be more thrilled than Ben Roethlisberger, who did not like this hire from the start.

Despite the friction between the two, it is hard to argue against the results. Haley’s offense did what Bruce Arians’ offense couldn’t—reduce the number of sacks and score more points. The one thing Haley couldn’t do is help lead the Steelers to another Super Bowl title.

Randy Fichtner was promoted to offensive coordinator last week in a move that should surprise no one.

Roethlisberger has a great relationship with Fichtner, but of greater importance, this move would provide continuity for the offense. The scheme won’t see many changes and the terminology will stay the same. That is key as virtually the entire offense will return next season.

Unlike the Dr. Jekyll-Mr. Hyde offense of 2017, expect Fichtner to run the offense through his quarterback as we saw over the latter half of the season. During Roethlisberger’s last seven starts, the offense averaged over 33 points per game as he threw for 2,422 yards and 21 touchdowns with just 5 interceptions.

That stretch represented arguably the best football of Roethlisberger’s career and should be the focus of the offensive scheme in 2018.

Can we expect any other changes? Definitely. No outside runs on fourth and short.

Are any veterans on the chopping block?

Kevin Colbert and Mike Tomlin assembled an impressive roster in 2017 and they would certainly like to keep it in tact for the 2018 season. Yet, with so much talent the Steelers will be tight against the salary cap and will need to evaluate that status of several highly paid—or underperforming—veterans.

First, take a look at the highly paid backups on the team with expiring contracts after the 2018 season. William Gay, Robert Golden, Darrius Heyward-Bey, and J.J. Wilcox all fit the mold. You can’t expect to replace every veteran with a younger, cheaper player, but a player such as Wilcox never saw the field and doesn’t seem to have a role on the defense moving forward.

In terms of starters, one name that should generate a lot of interest is Mike Mitchell. Not only could he save the team cap space, but releasing him could improve the defense.

I had a lot of talk about this last night so I'll remind everyone again this morning:
2018 is the last year of Mike Mitchell's contract
He has an $8 million cap hit
The Steelers can save $5 million against the cap (with $3 million in dead money) if they cut him.

Mitchell rarely makes any plays—four interceptions, four forced fumbles, zero sacks—in four years with the Steelers. He isn’t particularly strong in cover and has a history of taking bad penalties. Of course, talking about beating the Patriots in a rematch didn’t go over well either.

What would prevent the Steelers from making this move? Not having a viable replacement on the roster. The safety free-agent class is relatively weak and the odds of finding a starter in the draft is slim. Even with this rather grim outlook, it’s still an option worth exploring.

What will Le’Veon Bell do?

Get ready for Round 2 of Bell-Steelers.

Round 1 went the Steelers way as they were able to get Bell on the field for the regular season under the franchise tag, but they may not be so lucky this time around. As he told Jeremy Fowler of ESPN.com last week, Bell is prepared to sit out if tagged again.

In a way, it is hard to argue with Bell’s point of view. He’s been the best all-around running back in the game and proved it once again this year finishing just 36 yards out of the NFL rushing crown—despite not playing the final game—and ranked 10th in receptions.

From the Steelers perspective, it doesn’t make sense to cave into Bell’s demands. They already seemed willing to set the market for running backs with a contract offer last year, but do not want to blow that mark out of the water.

Working against Bell is his injury and suspension history. He was finally able to finish a season healthy this year, but can he do it again? With such a high volume of touches each season, the question becomes how much can his body withstand?

If last year is any indication, Bell isn’t afraid to hold out and if a long-term deal can’t be reached, I would not be surprised if that extends into the regular season this year.

What changes will the defensive coaching staff make?

Upon learning that Haley would not return in 2018, I waited for the next big coaching announcement concerning the defensive staff. Would Tomlin fire Keith Butler or just find replacements for Joey Porter and Carnell Lake? Maybe he would just clean house.

Instead he went with choice D, none of the above.

Gerry Dulac of the Pittsburgh Post-Gazette reported that Tomlin does not plan to make changes to his defensive staff. Given how he has handled his coaching staff in recent years, things can change in a hurry, but the news was rather surprising.

Sure, it looked like the return of Blitzburgh this year as they led the league in sacks and finished in the top 10 in both total and scoring defense, but those numbers didn’t tell the whole story.

They finished in the bottom half of the league in yards per completion and yards per carry. Even more concerning were the big plays allowed in both the running and passing game. It wasn’t just to the elite players in the league, but to quarterbacks such as Brett Hundley and DeShone Kizer.

It’s not like this unit doesn’t have any talent. There is a lot of physical talent on the field, but the product doesn’t show that. Part of it is the lack of development.

Burns, Davis, and Hargrave were all underwhelming in year two. Dupree was virtually invisible on a weekly basis. That’s four high draft picks with under four years of experience facing some question marks. That doesn’t cut it.

After the playoff loss, Heyward alluded to the failure of players executing their assignments to the defensive failure—not the scheme. He said the same thing at the end of LeBeau’s tenure with the team. That tells me that either the players aren’t good enough or the coaches aren’t adequately preparing the players to execute the game plan.

With needs at inside linebacker, safety, cornerback, and nose tackle, the Steelers are going to have a tough time upgrading the defensive personnel. That’s going to leave it up to the defensive scheme and player development from the coaching staff and from what we’ve seen so far, it is hard not to expect more of the same.

The toughest question of the offseason is also one of the—if not the—most important question.

Whether it is his production (89 tackles, 2 forced fumbles, 3 interceptions) or just being a great teammate, Shazier developed into one of the best defensive playmakers in the NFL and will be difficult to replace.

In games Shazier started, the Steelers defense allowed just under 17 points per game. Without him in the lineup, that number jumped to over 27 points per game. Certainly, there were other factors, but there is no arguing Shazier was the most important player on the defense.

What we do know is that the answer is not on the roster. Sean Spence likely won’t return and Tyler Matakevich is not a starter. That leaves us with the draft or free agency.

Over the past two seasons, the Steelers have found some key contributors—and even rookie starters—in the draft. Unfortunately, top prospect Roquan Smith of Georgia will be out of range. Instead, they may look toward Alabama’s Rashaan Evans or Malik Jefferson out of Texas.

If they decide to go the free-agent route, Zack Brown would have to be near the top of the list. The last two seasons were the most productive of his career with a combined 276 tackles and 6.5 sacks. Another potential gamechanger is former All-Pro NaVorro Bowman. His experience and production would add instant credibility to the middle of Pittsburgh’s defense.

The problem, though, is the Steelers will not have much cap room available. With the potential need to replace Mitchell at safety, Colbert may instead settle with a mid-tier stopgap until a draft pick is ready to step in.

Very nice first article Chris. Replacing Shazier will be huge but i tend to believe it’s the coaching. Quality LB and safety play going forward is a big deal. Why weren’t we out of our base defense on 3rd and 13 [coaching]. As far as Haley goes who runs a double reverse on the goal line?Maybe the Cleveland Browns from here out. All you guys do a great job keep it up.

[…] I’m very happy to announce that Chris G. has joined our merry band of SCB crazies! He has written for numerous outlets in the past and we are extremely glad to have him on board with us. Check out his debut article right here. […]