Many fans of the Black and Gold (those that haven’t burned their gear anyway) probably look a that score from London last Sunday and see an easy win for the Steelers. Not so fast my friends. While the Baltimore passing offense ranks dead last, the running game is still quite strong and the defense is still quite formidable. You can bet that John Harbaugh will have taken plenty of notes about just what the Chicago Bears did to the Steelers on the ground. Throw in the fact that the Ravens always play the Steelers tough then you better not be counting your chickens before they hatch. Oh… Don’t forget the Steelers’ offense isn’t exactly clicking either.

Prior to the win on Christmas Day last season, the Steelers had lost four straight and six out of the last seven games to Baltimore.

Antonio Brown currently leads the NFL in receiving yards (354) and receptions (26) after three weeks of play. As long as Ben Roethlisberger does not have a true outlet in a tight end I think he will continue to target AB. This comes despite his comments Tuesday that he may be targeting him “too much.”

Deshaun Watson gave his first game check to Texans employees who lost everything in Hurricane Harvey.

There wasn't a dry eye in the house. pic.twitter.com/beaMZsdzWw

This is a very important point made by Steelers.com’s Bob Labriola about the rules surrounding the National Anthem. This is from his “Asked and Answered” column.

GERARD GAMBINO FROM BOYNTON BEACH, FL:
If this is in fact written in the rule book why is it not enforced? The specific NFL rule pertaining to the National Anthem is found on pages A62-A63 of the league rulebook. It states:

“The National Anthem must be played prior to every NFL game, and all players must be on the sideline for the National Anthem. During the National Anthem, players on the field and bench area should stand at attention, face the flag, hold helmets in their left hand, and refrain from talking. The home team should ensure that the American flag is in good condition. It should be pointed out to players and coaches that we continue to be judged by the public in this area of respect for the flag and our country. Failure to be on the field by the start of the National Anthem may result in discipline, such as fines, suspensions, and/or the forfeiture of draft choice(s) for violations of the above, including first offenses.”

ANSWER: I tried, I really did. I tried to keep this football only. But such blatant factual inaccuracies must be addressed. You start with, “If this is in fact written in the rule book …” You don’t know? You didn’t check? Is there no Google in Florida? Because if you had gone to Google and typed in, “NFL rule book national anthem,” the applicable information would have been made available to you. But you didn’t, so let’s begin with the basics:

What you are quoting, I will point out, is the NFL Game Operations Manual, which includes nearly 200 pages of procedures and policy for regular season games, including how many towels the home team must provide to the visitors. In an email to The Kansas City Star, Brian McCarthy, the NFL’s vice president of communications, explained that the only part of the manual dealing with the anthem contains the words “should” and “may” but not “must.” No player is required to stand at attention, and the NFL is not considering punishment for players or teams choosing to kneel or stay in the locker room during the national anthem.

And you wonder why people are so confused all the time with constant misinformation being spread….

We’ll be doing the Steel City Blitz Podcast presented by 26shirts.com/Pittsburgh this evening but because our audio has been so sketchy we are moving away from the live shows for the time being. It will still appear via Spreaker, iTunes, iHeart Radio etc. 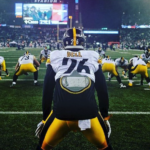 A few brief statements, first a teams play usually reflects the attitude and demeanor of it’s leaders. This team is far too complacent as road favorites. As far as the Anthem goes, i watch football on Sunday to escape all the B.S. and kick back and recharge the batteries Mr. President please stay away. The receiving corp might not be that good. The plays aren’t very creative and they are running poor routes. Except for A.B. and he needs some help.

I would agree on a couple of things here including the President moving on to a new rant and the questions about leadership. Ben and Cam and to a degree Tomlin did not handle this well. I also agree about route running. Bryant is poor at best. Rogers has improved and JJSS still has a ways to go too.