The Steelers released their 2016 Preseason schedule yesterday. They’ll open the season with Detroit and and Philadelphia at home, then close the exhibition slate on the road at New Orleans and Carolina. The 2016 Regular Season schedule should be out within the next couple of weeks.

Get your very own Heath Miller vinyl decal from us at SCB! Shoot me your address and I’ll send you one! Perfect for the back of your vehicle or your man cave!

Chris and I de-briefed this morning about Houston cornerback William Jackson III. We both think he fits the cornerback mold of what Keith Butler wants and would be thrilled with him at number 25. As is the case this time of year, some anonymous GM’s are reportedly saying they don’t have him graded very high and it has to do with scheme. This is very normal in the weeks leading up to the draft.

Tweet of the Day… And here I said he would be fired right after the playoff loss.

"I fully expect the Bengals to give Marvin Lewis a contract extension." –@JasonColeBR on @SiriusXMNFL who had report of CIN impatience.

I think Lewis is a good man and a good coach but it has become clear to me he can’t control his players to the point where when the chips are down they can come through. I’m very surprised he’s back after the problems in the playoff game as well as the string of losses.

NYJ tackle D’Brickashaw Ferguson is retiring. He played 10 seasons and NEVER missed a snap. I tip my hat to him. Incredible. 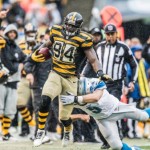