With the draft about three weeks away, the top of the draft seems to be pretty much settled. What order it goes in is uncertain but you can bet Laremy Tunsil and Jalen Ramsey will go 1-2 or vice-versa. Chris and I are working on our first round mock right now and will have it ready to go soon.

I’m also working on a piece for this week about why the process of elimination can be used to figure out what position the Steelers will choose at number 25.

We’ll never know the whole story about what happened with former Saints’ defensive end Will Smith but it doesn’t matter. What a senseless and completely ridiculous crime. I hope his wife recovers and can be there for their three children.

This past Friday, the Steelers welcomed four more college prospects to town. The four were defensive lineman Javon Hargrave of South Carolina State, defensive ends Quinton Jefferson of Maryland and Dean Lowry of Northwestern and safety Demontrae Elston of Ole Miss. If my math is correct, they’ve now had 11 or 12 defensive backs visit in the last seven days.

For a 22-year old, I thought Jordan Spieth handled his crushing defeat about as well as you could imagine. Had to be one of the more difficult green jacket ceremonies for any defending champion.

Kudos to Steelers’ Head Coach Mike Tomlin who made a plea last week to high school coaches to be more on top of concussion issues. I’ll have more on this later this week.

William Gay’s purple cleats which he wore in memory of his mother who was a victim of domestic violence, will be raffled this week. Gay donated the shoes to the Women’s Shelter of Greater Pittsburgh.

Rumor has it that Johnny Manziel is living with Super Bowl LI MVP Von Miller. I’m sure the Broncos are thrilled about this development. 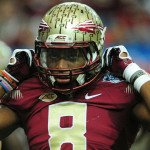