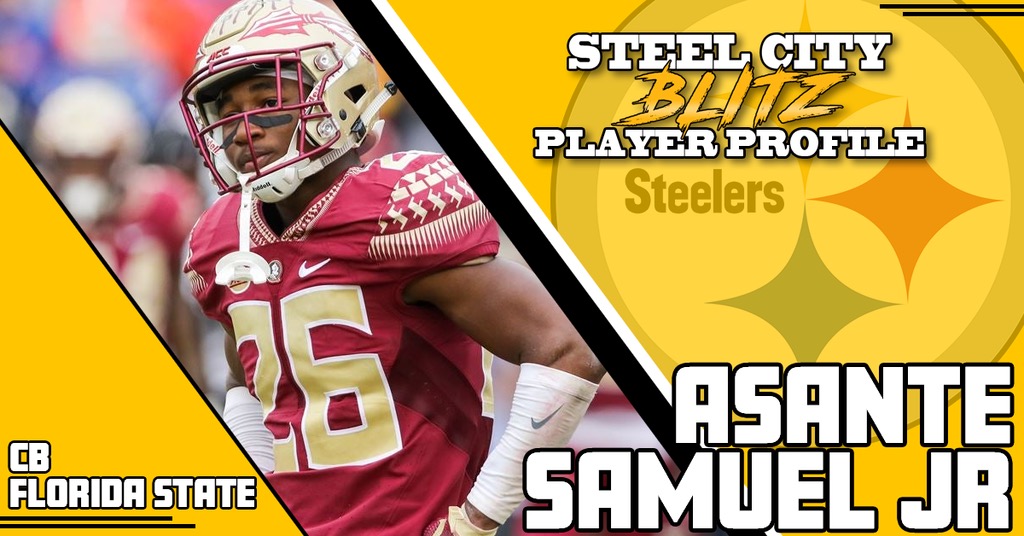 Samuel was a 4 star recruit coming out of Sunrise, Florida. Committed to Florida State over other top schools like Alabama and Ohio State. He helped lead his high school, St. Thomas Aquinas to two state titles as a Sophomore and Junior. Was named an under armor All-American coming out 2017. Asante waited two days after national signing day to sign his letter of intent to honor the anniversary of his late grandmothers passing. He is the son of former Patriots/Eagles/Falcons cornerback Asante Samuel.

Short area quickness: Samuel displays light, quick feet that show up repeatedly on tape. Whether it’s mirroring receivers at the line of scrimmage or working quickly downhill in off coverage, he’s explosive. Samuel gets in and out of breaks with ease which helps him stay in phase. Has a quick trigger, good instincts and trusts what his eyes tell him. Made several plays on the football in the WR screen game where blockers were not able to beat him to the spot. Has an efficient, clean looking pedal.

Competitive toughness: Despite his diminutive frame, Samuel doesn’t back down from anyone. Frequently seen jawing after the play, he isn’t someone that you can punk out on the perimeter. Has the swagger and confidence in himself that you look for in elite corners. Willing to get involved in run support and made a couple outstanding plays in that area in the games that I watched. Played a lot of off coverage but teams weren’t able to screen him to death. When forced to come up and make tackles in the underneath quick passing game, he proved capable.

Man Coverage ability- Really sticky in coverage. Played mostly on the boundary but also has experience working inside in the slot. Went toe to toe with several really talented receivers in the ACC such as Dyami Brown and won most of those battles convincingly. Confident in his ability to make breaks on the football in the air. Saw multiple instances where he wasn’t fooled by double moves on the boundary. Has the necessary speed required to stick with speedsters on deep routes. Displays patience at the line of scrimmage while mirroring.

Size is the biggest issue, there aren’t many boundary corners at the next level that have excelled with his body type. Only gave up a half dozen or so catches in the games that I watched but two of those were deep balls, one to Louisville’s Dez Fitzpatrick which went for a touchdown. Was fortunate to not give up a deep ball late in the Carolina game where Dyami Brown had him beat. Played a lot of off man coverage in college, NFL teams will likely test him underneath and make him tackle bigger, physical receivers. Played lots of trail coverage in college, would like to see him utilize his back pedal more. Wish the ball production was a little more consistent, let a couple QBs get away with poor throws by not coming away with turnovers. Zone coverage needs some refinement, feet get stagnant at times

Many will try to pigeonhole Asante Samuel Jr. into a slot specific role at the next level but I would not discount his ability ability to play on the boundary. If you are a team that is looking for a corner who excels in man coverage and offers some outside-in versatility, Samuel fits like a glove. Even in the event that he has to make a permanent move inside to the slot, Samuel has the necessary quicks to provide value. If he lands in a good spot where he can gradually learn the ins and outs of zone coverage, he could become a draft day steal. If this guy was 2 inches taller and 10 pounds heavier, we would be talking about him as a first round lock. Samuel should be an early contributor in the secondary.