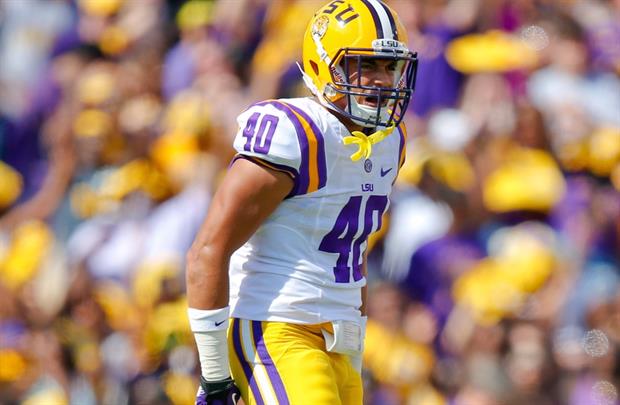 The Pittsburgh Steelers failed to sign an inside linebacker in free agency. Vince Williams in set to be the starter, but is an obvious liability in the passing game. The Steelers need to find a solution to that issue as it hurt the defense quite a bit last season. Duke Riley may be an answer.

What’s to like: A good athlete, can run sideline to sideline. Productive when given the opportunity. High motor, max effort guy. Has a ton of experience in coverage. High football IQ, reads, diagnoses and reacts quickly. Shoots gaps quickly. Plays with a ton of passion and heart. Works well sideline to sideline, takes good angles. Plus open field awareness. High ceiling, potential pick. Got better as the season progressed.

Concerns: Lacks size and bulk. Shortage of play strength Over runs the play, missing tackles. Without leverage, he gets overwhelmed by offensive lineman, pushed around. Has a hard time getting off blocks. Tackling technique is suspect, lunges too often. Sits and waits for blockers to come to him, needs to establish leverage. Limited experience, only a starter for one season.

Verdict: Riley isn’t a big guy, but neither was Ryan Shazier. Speed and instinct fuels him. Steelers would use Riley to back up Shazier and spell Vince Williams on 3rd downs and obvious passing downs. Riley is raw but has a high ceiling. Could play inside linebacker in a 3-4 or 4-3 as an outside linebacker, I prefer him in the latter. Steelers met with Riley at the NFL Combine.

[…] added another draft journal Saturday on Duke Riley, who may be a nice addition at inside linebacker later this month in the draft. We’ll […]