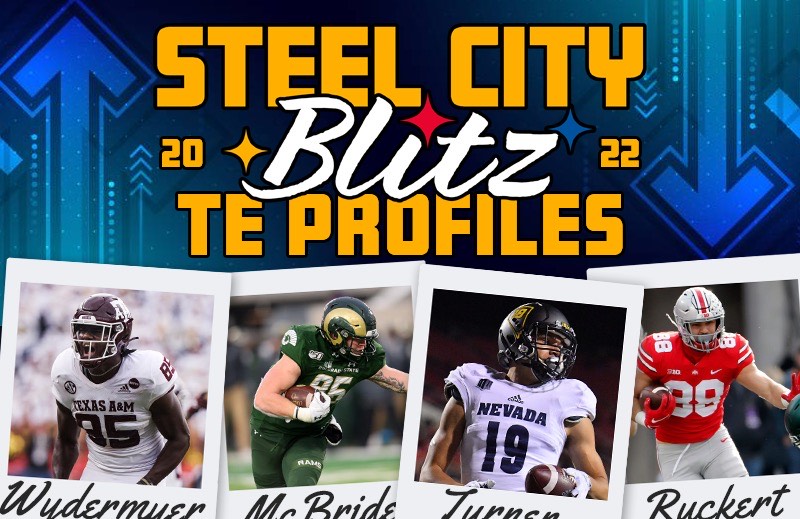 One could argue the Pittsburgh Steelers are more than happy with their current roster of tight ends. Pat Freiermuth had a terrific rookie season. Zach Gentry has turned himself into a very nice number two option and the current number three is Kevin Rader has shown some ability. Therefore, is tight end a position they may look at? It sure could be.

What’s to Like: QB’s security blanket… Excellent size… Terrific seal blocker, once he gets his tail turned the defender is done… Three-Sport star in high school in football, basketball and baseball… Can line up anywhere along the formation… Better than average hands… Not fast, but athletic and can run through tacklers…

What’s Concerning: In-line blocking can be an issue… If he doesn’t win off the ball, the defender will have an advantage at the LOS… Route running will need to be cleaned up… Can become a spectator when others have the ball… Only one score in 91 total receptions last season.

Our Draft Grade: In a weak class for tight ends I have McBride as a late second rounder. He’s a good athlete who can do a lot of really good things. As a ‘move’ blocker he does pretty well and when he has to ‘hook’ the end he also excels. In-line however is challenging for him. He needs to improve his strength and technique there. Any team he goes to he becomes an immediate #2 tight end in my book and whether he becomes a #1 is up to him.

What’s to Like: Athletic, former wide receiver who has excellent NFL-type size… Able to catch the ball all over the catch radius (high, low, wide)… Best blocking comes as a ‘move’ tight end… Above average acceleration for a tight end…

What’s Concerning: Blocking is a major issue… In-line blocking is average at best… Struggles to ‘turn tail’ and cut off defenders to the outside… Route-running needs work… Hands lack consistency in catching the ball…

Our Draft Grade: It all depends on what a team is looking for. If you already have tight ends who are good blockers then maybe you take a flyer on Wydermyer in the late third or fourth round. His athleticism can create problems for defenses but he isn’t going to worry anyone as a blocker.

What’s to Like: Big, strong guy who has plenty of aggression in his blocking… Willingness and enjoyment when blocking on the move… Willing to catch the ball in traffic… Runs pretty decent routes for a guy his size…

What’s Concerning: In-line blocking is decent but can be improved upon… While he has straight-line speed, I don’t see a lot of RAC yards with him… For some reason he doesn’t always trust his hands/Double-Clutches… Late to recognize pass rushers when staying in to protect.

Our Draft Grade: Ruckert is a classic third round type of tight end for me. He should easily fit somewhere as a #2. Whether or not he becomes a starter I’m not sure but he could definitely be a spot starter from time to time.

What’s to Like: Winner of the Campbell Award which is the “academic Heisman…” Extremely hard worker and academic skills translate to the field as a student of the game… Understands positioning when running routes or boxing out defenders… Stays involved through the whistle/hustles to stay in the play.

What’s Concerning: Has to get tougher as a blocker… Not likely a YAC type of receiver… Footwork needs to come along more both in blocking and in route-running… Needs to use his size/get bigger at the top of routes when he has position.

Our Draft Grade: I’m higher on this guy than most. I think he can be a third rounder for sure. He works hard and plays hard and can be a matchup nightmare with his size. If he gets better as a blocker I can see him being a starter at some point in his career. He has that type of potential in my mind.

What’s to Like: Athletic big man with terrific size… Really good hands… Will definitely take advantage of smaller DBs in the Red Zone… Best as a blocker when coming out to attack on screens… Definitely has YAC potential…

What’s Concerning: Has to get stronger… Gets where he needs to be as a ‘move’ TE but doesn’t finish well… While hands are pretty good, he doesn’t always finish catches in traffic… LBs have no problem knocking him off his over the middle routes…

Our Draft Grade: I view Turner as a sixth round guy. There are some things athletically to like but there are a lot of things that need work too. If you are looking for a strictly ‘receiving type’ then he’s your guy. The blocking has a long way to go.

What’s to Like: Massive size and catch radius… Boxes out smaller defenders using his frame… Doesn’t go down easily on first contact… Toughness and willingness is evident… Doesn’t look fast but creates more space than you think… Matchup nightmare in the Red Zone due to his size and length…

What’s Concerning: In-line blocking is a work in progress… Struggles to keep contact on smaller DBs on screens… Needs to get stronger period… Hands as a catcher are average… Hands as a blocker require technique upgrades… Route running needs to be refined…

Our Draft Grade: Experts have Woods all over the place but I really think someone will grab him in the fourth round. He had a very average career at Oklahoma State before transferring to Virginia where he had a breakout season in 2021. I guarantee you that at least one team will see that as a sign of what is coming with him. He has a little bit of position flexibility in terms of being in the backfield, out wide or in-line.

Other Names to Keep an Eye On…

SCB Steelers Quick Hitters: The “Must Be a Given” Edition