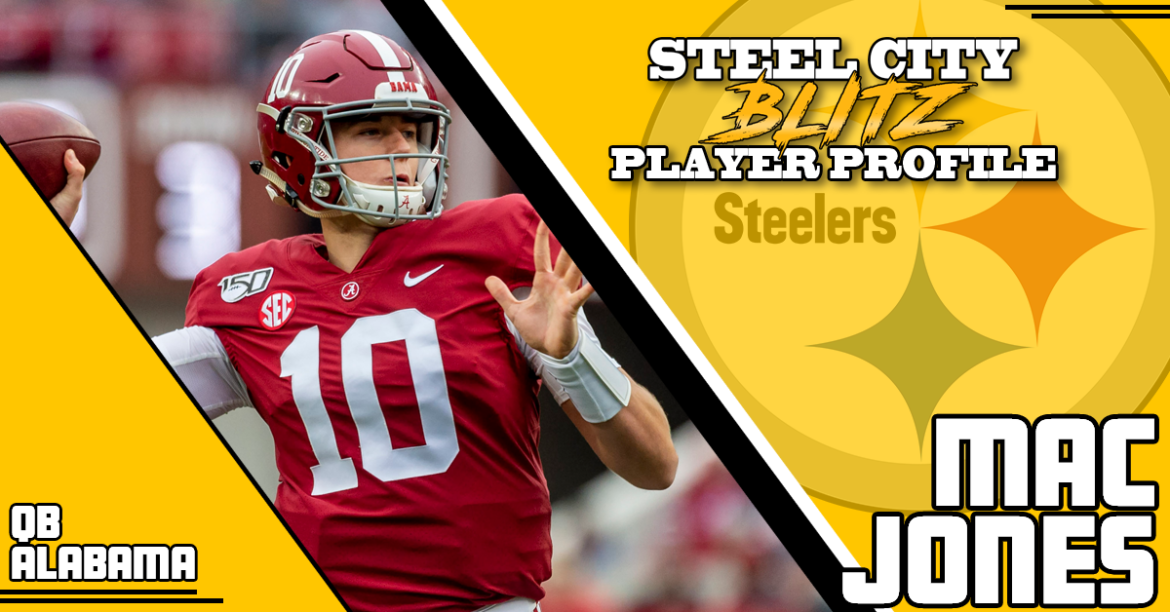 Ben Roethlisberger is back with the Pittsburgh Steelers for one more year which means they have to have a quarterback ready to replace him. Is Alabama’s Mac Jones on the Steelers’ radar?

Attended The Bolles School, one of the more prestigious private schools in Florida… Also had offers from Baylor, Kentucky, Oklahoma State and Texas A&M… Led the nation with a completion percentage of over 76%… Heisman Trophy Finalist losing out to teammate DeVonta Smith… Mother, Father, Brother and Sister all played sports in college. He’s the only one to play football however.

Throws a terrific deep ball that allows receiver to make a play and keeps it away from the defender… Shows solid ability to read, process and move to next target… Won’t keep defensive coordinators up at night with running ability but he’s capable of getting a few years scrambling… Sneaky athleticism that is just is enough to get him out of heavy rushes at times… Puts very nice touch on the ball… Has the ability to throw guys open… I do admit, there are similarities to Tom Brady but let’s not get crazy.

Poor throws are a result of too much weight on the back leg… Feet can get a little too sedentary at times in the pocket… Overall arm strength for me is a question mark… While his overall decision making is solid, I think he checks it down too often… Lacks ideal height (many list him as 6’3″ but my research has him more like 6’2″)… Balls definitely get batted and tipped… His play-action moves aren’t real fluid/takes too much time in certain instances… I wonder just how poised he can be. Seems to get a little scattered at times.

Clearly there’s a lot to like and appreciate about Jones. He has total command of the offense, has a competitive edge to him and is able to make plays in a variety of ways. There is no question that he benefited from having so much talent around him. Fantastic receivers, top running backs and arguably the nation’s best offensive line but all that said, you still have produce and there’s no question that Jones did. I see two areas of concern for him. First is his overall arm strength. I question how well he will get it to the outside both accurately and without letting NFL DBs jump it. Secondly is that I believe he will need a very favorable set up around him. He will need playmakers and an above average offensive line. Jones is not the kind of QB that will be able to overcome those deficiencies.

Quarterbacks are almost always taken higher than they should be. Teams are desperate for talent at the position and they are willing to draft it early in hopes of striking gold. I won’t be surprised to see Jones go in the first round but I have him as a late first/early second rounder. If the Steelers are legitimately interested in him they would have to take him at 24. He won’t be there at 55.

The if i were GM my first two picks would be, Rashawn Slater #1 he helps right away at just about any spot on the O-line , Javonte Williams #2 Let’s not kid ourselves there isn’t a good RB on the roster right now. Their time has come and past to groom Ben’s replacement they are going to have to go the free agent route here.

These were my early draft thoughts. It appears both these guys have flown up the draft board. I’ll reset my bearings and come out with a early mock. BTW last year i did call Claypool last year. If he were a little more cunning he could have easily had 8-12 more pass interference penalties.