The biggest issue facing the Pittsburgh Steelers this off-season has been resolved. They came to an agreement with Ben Roethlisberger on a restructured contract paving the way for the quarterback’s final season in the Steel City. Without getting too technical, Big Ben agreed to take a five million dollar pay cut and then move his contract to the bet minimum of just over $1 million. The rest is in a signing bonus and in what are called “voidable years.” What this all means is very simple. Big Ben is going to saddle up for one last ride. This contract makes clear that he will be the QB for one more year and then he becomes a free agent or retires. The Steelers will have about $10 million in dead money for 2022 but then that’s it.

We broke all of this down last night on the SCB Steelers Podcast presented by DEK Roofing Inc. Ben and Ian are excellent at the numbers and hopefully they make it easier to understand than I can. We also discussed the first round of the draft and a whole lot more.

Tweet of the Day… Pffffft. In Michigan we call this Tuesday.

The Watt brothers are just different.

This is what they call "post-workout recovery."

The decision to have Roethlisberger return for one more season isn’t good news for everyone. Mason Rudolph will enter the final year of his contract once again carrying the Microsoft Surface. Is this an indictment of how they feel about Rudy’s long term potential? It has to be doesn’t it? Now if I’m him, I’m preparing lime I’m the starter. As a number two, you’re always one snap away from playing as 2019 proved but those odds increase when the guy in front of you is 39 years old. Of it doesn’t come to that then I think the decision for him becomes easy. Move on.

ESPN Draft Guru Todd McShay has four quarterbacks going in the first four picks and five in the top ten. Trevor Lawrence to JAX, Zach Wilson to NYJ, Justin Fields (in a trade) to CAR and Trey Lance to ATL. He then has Mac Jones to San Francisco at number nine. I’ll have my profile of Jones coming out this weekend. Him going in the top ten tells you exactly how valued quarterbacks are. For those interested (which is all of you) he has the Steelers taking Alabama RB Najee Harris at 24.

SCB Steelers Podcast 211 – A New Deal and RB vs OL 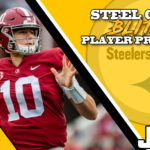