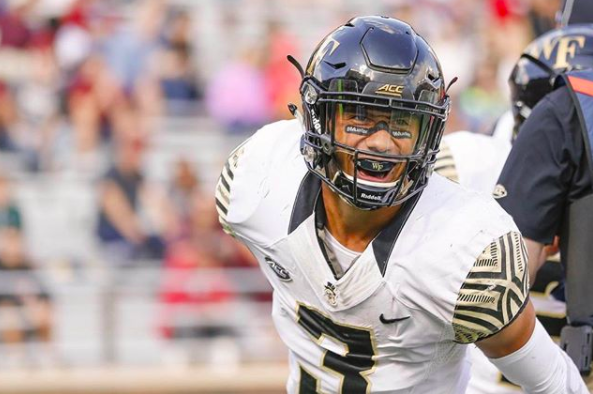 There’s little doubt a safety is in the Draft plans for the Pittsburgh Steelers but who and where in the draft are major questions. Wake Forest’s Jessie Bates checks a lot of the boxes the Steelers usually like.

The Skinny: Bates leaves WFU after just two years of playing. He was redshirted his freshman year. His first season was arguably better than his last one. He collected 100 tackles in 2016 along with five interceptions.

What’s to Like: He’s “smooth” as a safety, meaning, he has good feet and hips. Makes turns and transitions with ease. I think he plays faster than his 40-time indicates. Takes pretty good (can over-pursue though) angles in pursuit and tackles low which works for him more often than not. Looks like he can handle both man and zone coverage quite well. Has really impressive ball skills and tracks it like a hawk. Returned 27 career punts, nine in 2017 where he averaged 17.9 yards per return with one TD.

What’s Concerning: Not the most aggressive guy I’ve seen and is often hesitant to come down hill and attack ball carrier. Even when other defenders have engaged he doesn’t exactly jump in. Tackling consistency has to get better. Tends to let guys behind him a bit much for my liking in coverage; When he does though his athleticism allows him to still make plays. That doesn’t always translate at NFL level however. His frame concerns me. While athletic, can he take a 16-game pounding?

The Verdict: If Bates is there in Round 2 he’s going to be very difficult for the Steelers to pass up. That’s likely the problem though. While I don’t see him as a true first rounder, he’s more than likely going to go before the Steelers get a shot at him in the second. The Steelers like young, athletic guys and Bates fits the bill. The inconsistent tackling will drive the fan base nuts but if he can turn the ball over more often than his predecessors then he may be worth it. The potential to be a punt returner is also an asset.

SCB Steelers’ Quick Hitters: The “Blew It? Not Exactly” Edition

[…] my Draft Profile of Wake Forest Safety Jessie Bates III. He will definitely be in the Steelers’ conversation. Although considering the news above, […]