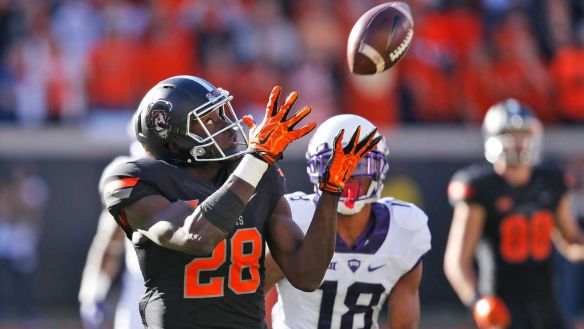 After profiling Oklahoma State Quarterback Mason Rudolph it seemed only natural to take a look at his teammate James Washington. The Steelers have reportedly shown interest in him (they dined at his Pro Day) and with a wide receiver more than likely on the draft menu for them, I’m taking a look at the big-play receiver.

The Skinny: Was a two-time All-Big 12 selection for the Cowboys who average an incredible 20 yards per catch. Looks like a guy who could compete to be a number two wide receiver in the NFL.

What’s to Like: Good strong hands, able to make catches in traffic… Good blocker once he’s engaged… Not easy to bring down; has very good upper body strength… Impressed with how quickly he can get by DBs despite not having “elite” speed… Multi-sport athlete who was involved in track and tennis in high school… Personally, I like how he handles himself on the field; very professional.

What’s Concerning: Size is an issue at under six feet… Lined up on the right side of the OSU formation way more than the left; can he handle moving around the formation more at the pro level?… Has to be more aggressive when stalk-blocking; defenders often run past him due to lack of hustle and aggression… Route tree appears to be limited; lots of outs, posts/skinny posts and fly routes with little else… Footwork improvement is a ‘must.’

The Verdict: Washington looks more like a strong safety or running back than wide receiver with his muscular arms and upper body but he produces. The limitations he has concern me but he appears to be a hard worker who could develop into something special. The fact that he rarely saw press coverage is a concern but his strength and sneaky burst could make that less of an issue. Definitely has some footwork things to clean up but the big play threat with him is impossible to overlook even for his size. I view him as a third rounder. He doesn’t strike me as a Steelers’ type of receiver though so I’ll be surprised if they take him. That said, if he’s available on second day of the draft don’t dismiss him.

SCB Steelers’ Quick Hitters: The “Meeting of the Minds” Edition