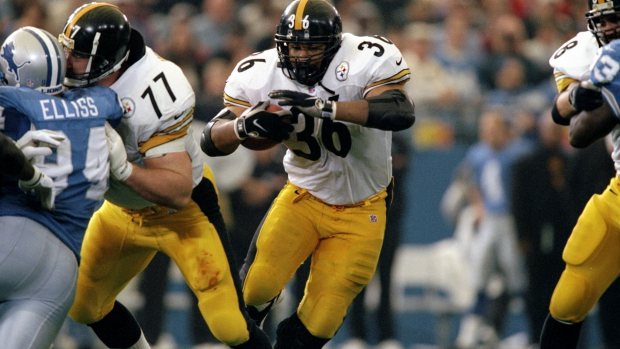 In a few weeks the Steelers open their annual summer training camp to prepare for the 2015 NFL season. For 49 years the Pittsburgh Steelers have held it on the scenic fields of St. Vincent College in Latrobe, PA. Many teams no longer uphold the tradition of bonding at a college campus. Instead they prefer to hold it at their own training facilities. In 1998, I would have the opportunity to attend this yearly ritual.

In 1997 the Steelers came within 3 points of the Superbowl. However, heartbreak begat optimism for the following season…and I couldn’t have it birthed soon enough. Midway through March I joined the “Official Steelers Fan Club”. Jerome Bettis, “the Bus”, sponsored it. You even received his autographed photo upon payment. I can hear it now…Geek! Perhaps. But one of the perks of joining was the ability to be down on the field at training camp. I would take full advantage.

August arrived and on a Sunday morning I would depart for Latrobe. A few days earlier the first hurricane of the season formed west of Africa. That’s a long way to come to rain on my parade. In inclement weather, the Steelers move their training camp practice indoors. No fans allowed. I held firm to my plans as it was downgraded to a tropical storm. However the remnants could still wreak havoc on my travels. Practice started at 2:30pm. The rain, unfortunately, was already there. As I made the long drive down I was greeted with a constant downpour. The storm was heading north and it was my opinion I was passing through what had hit Latrobe hours earlier. I felt the practice would go on as scheduled. However the weatherman on the radio said it was still a 50% chance of rain in Latrobe. He mentioned with those odds you might as well just toss up a coin.

I arrived at St Vincent’s in plenty of time…surprisingly. The sun was now shining but the field was still wet. I checked in with the person running the Steelers Fan Club. The team had not yet announced if they were still holding the afternoon practice outdoors. We were informed everyone was in a “wait and see” mode…it was 50/50. But this day I was in luck. Here came the team out of the college’s gym and down the steps to the field. Game on! Jerome Bettis came over to greet us. His gregarious personality almost as gigantic as the gentleman himself. I watched for over an hour as they ran through drills. They then set up a scrimmage with Bettis in the backfield. On the 3rd carry it happened. He slipped on the wet grass and fell to the ground grabbing his leg. He was done for the day.

The rain I wished away left enough of a calling card to dampen the entire 1998 season. Jerome Bettis seemed to be haunted by that injury all year. Even so, the Steelers were 7-4 heading into a Thanksgiving matchup in Detroit, Bettis’ hometown. He was made an honorary team captain for the game. With that came the calling of the opening coin toss. His duties were doubled that day as the game headed into overtime. It was from this second coin toss that the Steelers would never recover. Jerome watched the airborne coin and shouted out “Tails”. The referee heard “Heads”. The coin landed and displayed tails. Jerome thought he had won. The ref informed him otherwise. The Steelers lost the coin toss, they lost first chance with the ball, they lost the game…and they would lose the next, and last, 4 games that season.

I had won my “toss of the coin” with the weather that August afternoon. But it seems that season the Steelers lost all of theirs. My luck with the weather led to a long year for Jerome Bettis. From the training camp injury to the famous phantom “Heads” call. In 1997 they just missed going to the Superbowl. Now in 1998, they would not even make the playoffs. It all culminated with a coin in Detroit. Jerome would have his revenge though. The next time he would return to play in Detroit, the Steelers would be in the Superbowl. He led the team out of the tunnel that day…and on to victory.

Jerome’s legacy lives on in that the NFL changed the coin toss rules after that 1998 season. The words “call it in the air” that have always been a staple, even in playgrounds, are no more. You now have to call it before the coin is tossed. The referee even repeats your choice back to you to make sure. A couple of years ago this was spoofed in a Papa John’s Superbowl commercial. Jerome Bettis comes out to call the coin toss. He finds Peyton Manning dressed as a referee ready to do the honor. Jerome calls “Tails”.

I’ll never forget that game, I was sitting on my couch and I think I literally lost my mind on that Turkey Day Debacle.